GPS systems thrown out of whack by Elon's rocket 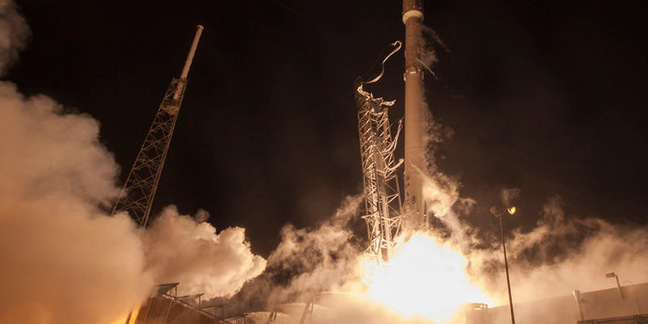 A still a Falcon 9 rocket launch carrying Orbcomm-2, another satellite

A SpaceX rocket ripped a humongous hole in Earth’s ionosphere during a launch in California last year and may have impaired GPS satellites.

The Falcon 9 rocket was blasted from Vandenberg Air Force Base on 24 August last year. It was carrying the Formosat-5, an Earth observation satellite, built by the Taiwan’s National Space Organization.

As the rocket reached supersonic speeds minutes after liftoff, it sent gigantic circular shock acoustic waves (SAWs) rippling through the atmosphere. These SAWs continued to extend outwards for about 20 minutes at a whopping speed of about 629 to 726 meters per second - equivalent between 0.021 and 0.0242 per cent of the maximum velocity of a sheep in a vacuum in Reg units.

It’s the largest rocket-induced SAW on record, according to a paper published in the Advancing Earth and Space Science journal. The plume tore a gigantic hole, approximately 900 kilometers (559 miles) in diameter stretching to 1,770,000 square kilometers (1,099,827 square miles), more than four times the total area of California.

The ionosphere is a region of the Earth’s upper atmosphere that contains a soup of particles that have been ionized from the Sun’s rays. The researchers estimate that the SAW blasted electrons away, causing the total electron content - the concentration of electrons along a one-meter squared region - to deplete by as much as 70 per cent.

The researchers reckon the fluctuations were probably pretty small and could have led to a range of errors in GPS navigation of up to a meter - not significant enough to cause major problems until the SAW dissipated.

The particularly large circular size of the shock wave was down to the way the Falcon 9 rocket flew. It had a nearly vertical trajectory, compared to most satellite launches that fly over a horizontal trajectory before the satellites are booted into orbit.

Disruptions in the ionosphere are to be expected for every rocket launch and are also detected during volcano blasts and solar flares.

“Understanding how the rocket launches affect our upper atmosphere and space environment is important as these anthropogenic space weather events are expected to increase at an enormous rate in the near future,” the paper concluded. ®