Still waiting for your Atari retro gaming console? You're not alone, its architect has just sued the biz for 'non-payment'

After we leave the EU we could cover that in a week with change to spare ... allegedly 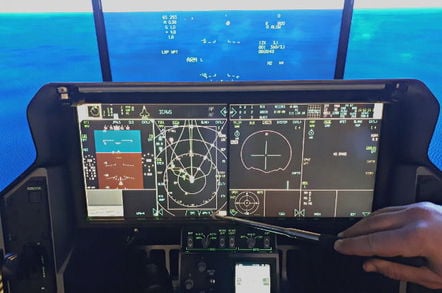 The F-35B cockpit, as seen by your correspondent in a simulator earlier this year

Britain will spend £345m ($486m) upgrading its F-35B fighter jets to the most recent, combat-ready, version of the aircraft’s operating system.

The figure was indirectly revealed by defence procurement minister Guto Bebb, in response to a Parliamentary question.

“The UK’s contribution will be around 4.5 per cent of F-35 Program common upgrade costs, from which the UK gains 100 per cent of the benefit,” said Bebb in his answer to Plaid Cymru MP Jonathan Edwards.

Figures reported by The Times newspaper pegged US estimates for upgrades to the supersonic stealth fighter at £7.67bn ($10.8bn) for software development and £3.84bn ($5.4bn) for deploying those upgrades across all F-35s ever built.

F-35 flight tests are being delayed by onboard software snafus

The sum payable by the UK is for deploying Block 4 of the F-35’s core software to the UK’s jets, which number 15 airframes at the time of writing. As we reported in January, the mishmash of OS versions currently running on the global F-35 fleet has hampered flight testing as ever more bug reports pile up from pilots and maintenance crews.

So far all of the core OS versions developed for the F-35 have been written to get the aircraft through the key tests it has to meet for its formal declaration of Initial Operating Capability (IOC), which is the point where the aircraft, its main sensors and its main weapons can all be used together in a warlike situation. The UK expects to declare IOC for the F-35B in December this year.

Block 4 of the F-35’s core OS is intended to be the final combat-ready version, though, judging by its comments on the previous version, Block 3F, the US Department of Operational Test and Evaluation appear to think this may not be the case.

IOC can be compared to Full Operating Capability (FOC). Think of IOC as similar to Windows’ Safe Mode – it’ll do a handful of core tasks OK but you haven’t got full functionality – and FOC as the whole shebang.

Cost has been an ever-present factor in public discussions about the F-35 project as a whole. The fighter is already expected to be the most expensive military aircraft ever produced, even before any fully operational versions are deployed.

Of public concern in Britain is the Ministry of Defence’s extreme reluctance to confirm simple details such as “are we still buying 138 F-35Bs?”, “how much are we paying for each aircraft?” and “have we accounted for spares and upgrades?”

The answer to the latter question would appear to be “no”, judging by the ominous silence of the MoD.

While Lockheed Martin, the aircraft’s builders, have previously told The Register that they want to get the cost per jet down by 14 per cent, the current price of an F-35B is $121m (i.e. 75 per cent of the 2012 price of $161m, as quoted by the defence procurement minister in February, at the link), which is £85m at current exchange rates.

617 Squadron RAF, the first frontline British F-35B squadron, is scheduled to form up in the UK this summer. ®