US mulls drafting gray-haired hackers during times of crisis 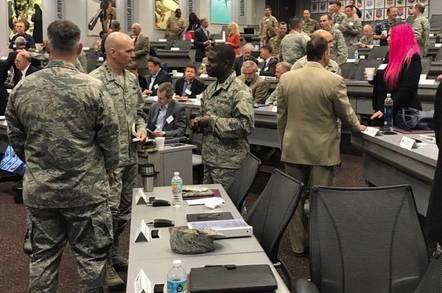 A US government commission has asked the public for its thoughts on possible changes to the military's selective service rules to allow the conscription of technical talent, including those with computer-oriented skills, regardless of sex or age.

The National Commission on Military, National, and Public Service, in accordance with the Congress in the 2017 National Defense Authorization Act, has been directed to consider how to encourage more people to participate in military, national and public service, in order to assure national security.

At the behest of Congress, the commission has been directed to solicit public input on possible rule changes. The commission did so in February through a notice published to the Federal Register, the official record of US government actions.

Among the various aspects of the US Selective Service System being re-evaluated is whether it might make sense to change the process to ensure that individuals with technical skills needed for national defense – medical, language, cyber, and science, technology, engineering and mathematics (STEM) skills – are to be required to register for a possible draft "without regard to age or sex."

The US Selective Service presently requires men, ages 18 through 25, to register. Bills have been introduced in Congress to require women to register but have not become law.

Any Selective Service changes won't happen soon – the commission isn't required to submit its recommendations to the President and Congress until March 2020. But the commission wants to hear from the public by April 19, 2018, via email, web submission form (3,000 characters at most), or postal mail.

Government agencies and the military have had a difficult time attracting individuals with computer skills. In 2014, former FBI director James Comey, for example, suggested the FBI would have to loosen its drug rules to hire pot-smoking hackers, before insisting he was only joking in the wake of criticism.

In any event, the tech talent shortage is said to be serious. The US Department of Homeland Security, for example, supports the US Cyber Challenge, a program to "to significantly reduce the shortage in today’s cyber workforce," by replacing them with semi-smart computer software.

"There is a radical shortage of people with the technical skills that are needed in time of conflict, " Alan Paller, director of research for The SANS Institute, told The Register.

But Paller suggests just changing the rules to cover a broader set of people with cyber skills won't achieve the desired results.

There's a very small set of people with the right skills and just calling them up from the private sector then could leave businesses vulnerable, he suggested.

Paller, however, expressed optimism that the cyber talent shortage can be addressed in a few years through the development of programs to identify those with aptitude for cybersecurity.

"The problem has never been the development of the people," he said. "It has been finding the 10 or 15 per cent of people who are naturals at it."

Paller pointed to programs like Cyber Discovery in the UK and Girls Go Cyber Start in the US, initiative to encourage the exploration of cyber security as a career possibility. The latter program, he said, nearly doubled the number of high school girls considering cyber security careers from 36 per cent before to 70 per cent afterwards.

In a phone interview, Katie Moussouris, the CEO of Luta Security, said the military faces a variety of cyber talent challenges related to both intake of personnel and retention.

"You can't simply enlist in the military and say I want to focus on cybersecurity," she said. "Where you end up is not based on willingness or aptitude."

And then once military personnel gain computer skills, the desire for family life, better pay, and not moving around makes the private sector more attractive, she said.

Moussouris suggests that simply lifting gender and age restrictions for the Selective Service won't work without cultural and organizational adaptation in the military. "The quarters, the accommodations, and the culture need a transition," she said, if the military is to achieve greater gender balance.

As for the age limits, Moussouris said it's an issue because many cyber operations happen in dangerous environments and the military does not want people with physical limitations endangering others team members.

"If there can be more remote advisory positions where you're given a task and can do it from a non-war zone, the age restrictions can be lifted," she said. "That would be a way to get the older folks like me who might want to serve involved." ®