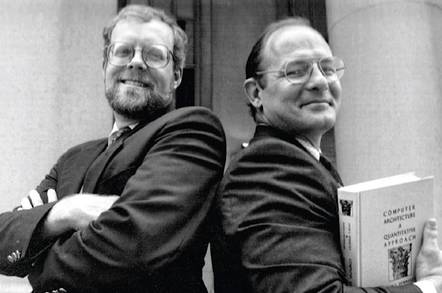 The two engineers who further developed and popularized the concept of RISC microprocessors have won the 2017 ACM Turing Award.

Professors John Hennessy and David Patterson were today announced as this year's (or last year's, if you want to be particular about it) winners of the prestigious honor named after Brit super-boffin Alan Turing.

They'll get to split a $1m prize, courtesy of Google. Hennessy happens to be the executive chairman of Google parent Alphabet, and Patterson works on the Google Brain team, it must be said. Hennessy has already confirmed he'll be donating his winnings to educational projects.

Of course, they earned the Turing gong. No suggestion of any favoritism here. No way, not when you consider their history.

Patterson led a UC Berkeley team that, in 1981, drew up the RISC-1, a 32-bit 31-instruction processor with 78 registers. The design used just 44,000 transistors, and outperformed CISC rivals that had more than double the number of transistors.

The RISC-1 would form the basis of today's RISC architectures, and was picked up by Sun Microsystems to create the Sparc family of processors.

Around that time, Hennessy, while teaching at Stanford University, also forged ahead with the RISC architecture concept, and cofounded MIPS Computer Systems to turn his blueprints into silicon. MIPS pumped out chips for high-end workstations, video games consoles, spacecraft, networking gear, and much more.

The pair's 1990 textbook, Computer Architecture: A Quantitative Approach, spread their RISC gospel to academia and industry, and is still required reading for programmers, computer engineers, and processor designers. Their work heavily influenced the development of various chip families – from Arm and Alpha to PowerPC – which are today used to power smartphones, internet-of-things gadgets, tablets, servers, and other gear worldwide.

Reduced Instruction Set Computers (RISC) had a cameo in Hackers, the 1995 suspense flick that misled an entire generation into thinking a career in infosec was a great way to meet women. A then-upcoming Angelina Jolie declared to fellow movie person Jonny Lee Miller that "RISC architecture is going to change everything," a statement that would prove oddly prescient in the following decades.

Hennessy was later made president of Stanford University, and today oversees Alphabet. Patterson is, as well as being a Googler, vice-chairman of the RISC-V Foundation board: RISC-V is an open and free RISC CPU instruction set architecture that has Western Digital, Nvidia, Google, and others excited.

The RISC architecture defines processors that support a small number of primitive instructions, and execute said instructions rapidly through a pipeline system. This reduces the number of transistors required to run software, which keeps the chips small, cheap, and economical in terms of energy use. The concept was not devised solely by Hennessy and Patterson, but they sure did their best to turn it into silicon we all use today, one way or another.

"Their contributions to energy-efficient RISC-based processors have helped make possible the mobile and IoT revolutions," said the Association for Computing Machinery (ACM), the group behind the Turing award.

"At the same time, their seminal textbook has advanced the pace of innovation across the industry over the past 25 years by influencing generations of engineers and computer designers."

Hennessy and Patterson join the likes of Tim Berners-Lee, Vint Cerf, Frances Allen, and the Diffie-Hellman duo in claiming the Turing Award. ®