First fondle When Samsung gave the world its DeX dock last year, we rated the device a solid, thoughtful job for its feat of allowing a smartphone to deliver a decent desktop experience.

In case you missed it, DeX is the name for an app, a desktop environment and the dock that boasts HDMI and USB out, plus USB in for power. If you plugged a Galaxy S8’s USB-C port into the dock, and the dock to a monitor, it displayed a desktop interface on that monitor. 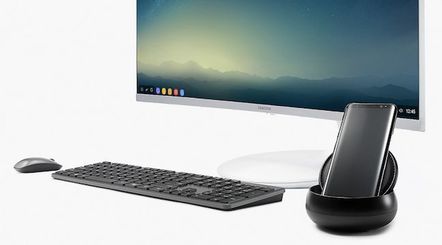 But this year’s model made it possible to use a Samsung smartphone as a touchpad, by laying the phone flat instead of on the jaunty angle last year's dock allowed. 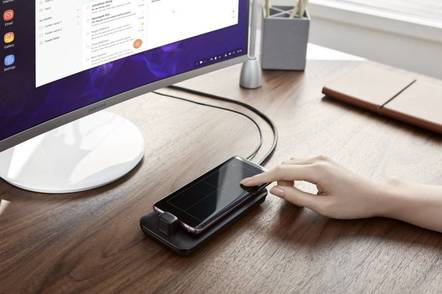 The Register got its hands on the new dock today, with a Galaxy S9 inside, and can report the new arrangement works well. The phone looks like it is floating, but actually rests on small pads.

It felt natural to reach out and swipe the phone. The pointer was responsive and slick. Right-clicking was a bit odd, as it required a sustained two-finger press and took a while to produce on-screen results. If Samsung were to add a quick pulse from the phone’s buzzer that would improve matters.

When Samsung launched DeX it suggested you might ditch your laptop and instead toss the dock into a bag along with a USB charger, HDMI cable, keyboard and mouse so you could use the DeX desktop in a hotel room or other location that housed a screen. Which was plainly ridiculous.

The idea is still a little far-fetched, but the 2018 dock’s rectangular shape makes it feel more portable, while turning the phone into a trackpad cuts the gadgets-you-need-to-schlep count by one. Samsung told your correspondent that an imminent update will let a phone in the dock act as a keyboard, too.

Overall, this year’s DeX dock feels like a sensible improvement. The desktop experience hasn't changed noticeably, which is no bad thing. Yet your correspondent is yet to see one used in anger. Why might that be? ®