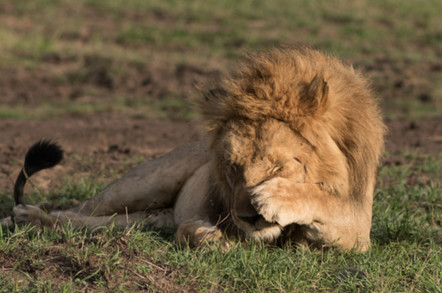 About 500km away, in the Maasai Mara National Reserve, also in Kenya, a lion does a facepalm. OK, the pic isn't contemporaneous, but still...

Sudan, aka "The Most Eligible Bachelor in the World” as per hook-up app Tinder, the last male northern white rhino, shuffled off this mortal coil yesterday, aged 45.

The sombre news was announced by the snub-nosed giant's home, the Ol Pejeta Conservancy, in Laikipia County, in the foothills of Mount Kenya, in a tweet earlier today.

The elderly singleton – of the subspecies Ceratotherium simum cottoni* – had to be euthanised after his condition – which was related to his age – significantly worsened, leaving the animal unable to stand and in considerable pain, his keepers said.

He moved to Kenya in 2009 after spending several years in residence at the Dvůr Králové Zoo in the Czech Republic.

The good news is that samples of Northern White Rhino semen and two females still remain. The conservancy said it hoped that in vitro fertilisation (IVF) techniques using harvested eggs from the two females – 27-year-old Najin and 17-year-old Fatu – and a surrogate Southern White Rhino may yet keep the species alive.

Should the efforts fail, the Northern White Rhino will likely follow the same fate as the Western Black Rhino, which was formally declared extinct by the International Union for Conservation of Nature (IUCN) in 2011.

A lack of political will to maintain habitats and attrition due to massive arseholes poachers meeting a commercial demand for rhino horn sealed the sub-species' fate.

Conservationists estimate that as of 2015 just 30,000 rhinos from five species still roam the planet.

The Register is monitoring the megafauna's situation closely, as, among other important reasons to do so, our official El Reg Standards Converter depends on it. ®

* The other white rhino subspecies – Ceratotherium simum simum – has members in the tens of thousands, mostly living in southern Africa, and particularly South Africa.

Page File Apocalypse now, and tomorrow, and the next day, and the day after that ...