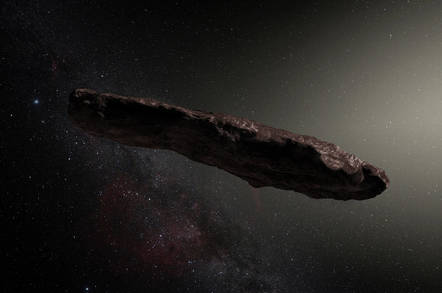 Pic 'Oumuamua, the mysterious and oddly shaped interstellar asteroid spotted by astronomers, was probably ejected from a binary star system.

The asteroid made headlines back in October last year for resembling a gigantic joint, or cigar, or a turd. The object is so different to other space rocks we've seen before, and appeared from such an unusual direction, that some speculated it could be an alien spacecraft. That Arthur C Clarke's Rendezvous With Rama described a cylindrical spacecraft that first appeared to be an asteroid in an odd orbit didn't hurt such theories either.

It turned out 'Oumuamua was just a bit of a weird asteroid, but astronomers were left puzzled by its origins. Now a paper published in the Monthly Notices of the Royal Astronomical Society on Monday shows that the alien rock was probably born during the formation of a binary star system somewhere beyond the Solar System.

"In single star systems like our own Solar System, comets dominate the mass budget of bodies that are ejected into interstellar space, since they form further away and are less tightly bound," according to the paper's abstract.

Binary systems, however, are more likely to have larger asteroid belts and be more efficient at ejecting material. It is believed that asteroids like 'Oumuamua were expelled during the formation of the binary system.

The nearest population of binary stars are also dominant sources of rocky material like 'Oumuamua, leading scientists to believe the stars in the system are probably A-type or late-B type intermediate mass stars.

Alan Jackson, lead author of the paper and a postdoctoral researcher at the Centre for Planetary Sciences at the University of Toronto, said: "It's remarkable that we've now seen for the first time a physical object from outside our Solar System.

"It's really odd that the first object we would see from outside our system would be an asteroid, because a comet would be a lot easier to spot and the Solar System ejects many more comets than asteroids."

'Oumuamua was detected by astronomers working at the Haleakala Observatory in Hawaii and means scout in Hawaiian. It has a radius of 200 meters and zoomed through our neighbourhood at a whopping 30 kilometers per second. The object came within 33,000,000km of Earth.

Its trajectory, speed, and orbit shape do not match any asteroids in our Solar System, and it is the first confirmed sighting of an interstellar asteroid. Jackson said its orbit has the highest eccentricity ever observed for a foreign object passing through our Solar System.

He hoped that 'Oumuamua can be used to study how planets formed in other planetary systems. "The same way we use comets to better understand planet formation in our own Solar System, maybe this curious object can tell us more about how planets form in other systems." ®