And he couldn’t do that, until tech support showed printers and staplers don’t mix 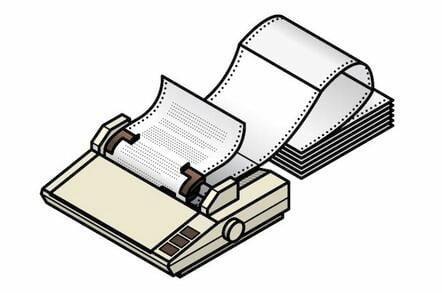 On-Call Why look at that! Friday is upon us, which means it’s time to read this week’s edition of On-Call, our weekly column featuring Register readers’ recollections of tech support jobs gone wrong.

This week meet “Pablo” who told us that “In the '90s I worked as a field service engineer for one of the leading companies supplying IT systems for insurance intermediaries in the UK.”

Pablo’s territory covered the northwest of England and was a couple of hundred miles from end to end. So one afternoon when he finished a job he called his dispatcher with high hopes his working day was done.

No such luck: HQ had another job for him, it was urgent and it was three hours away by road.

Pablo dutifully made the journey and found himself confronted by the sight of “a Mannesmann Tally dot matrix printer (could have been an MT86 but my memory is a bit vague).”

He recalled: “The customer was adamant that it was urgent since they had to print insurance renewal letters. More urgent still, an office junior whose job it was to wrangle continuous stationery – aka stripping all the perforated holes off the side of tractor-feed paper, then fold letters and put them into envelopes - was due to go home shortly.”

So Pablo got to work.

“A quick examination of the printer soon revealed the problem. The print head was jammed and couldn't slide along the carriage bar.” The source was easy to find: “Half a dozen staples in the printer ribbon which were holding two ends together.”

Pablo told On-Call he “removed the ribbon and showed it to the customer”.

At which point the printers’ owner suddenly recalled that the ribbon had snapped a few days earlier. So they "fixed" it.

The problem hadn’t immediately become apparent because the ribbon was a loop: it had taken a week or so for the staples to work their way through the cartridge and re-emerge to jam the print head. A fresh ribbon cured the problem and Pablo was able to make the three-hour drive home safe in the knowledge that the mail would go out on time.

Has a foreign body caused you grief? If so, write to On-Call and we might just slot you in here on a future Friday. ®