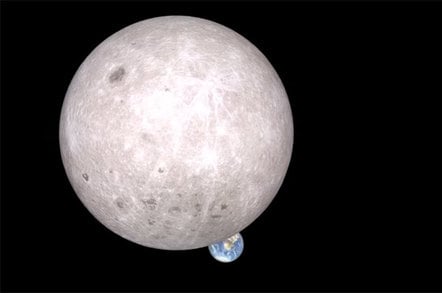 A neural network can wipe the floor with fleshy researchers at that most tedious of cosmic tasks – spotting craters.

Eyeballing craters is usually done manually, which tends to result in only the largest impacts being spotted, or via a crater detection algorithm (CDA), which works well on data it has been trained on but gets a bit stroppy when shown something new.

A team of researchers from Canada and the US took a convolutional neural network (CNN) and trained it to identify craters using Lunar digital elevation map (DEM) images provided by NASA's Lunar Reconnaissance Orbiter (LRO) before pointing the silicon smartypants at images from Mercury.

CNNs have become popular in recent years, requiring little in the way of pre-processing and turning up everywhere from systems recognising food to machines classifying music.

The Register expects the next evolution to let us know the difference between a doughnut and Depeche Mode.

The crater-spotting CNN performed well on test data, matching 92 per cent of the features identified by humans. Humans themselves will often disagree by as much as 40 per cent when looking at the same imagery.

As well as getting to within a gnat's whisker of finding all the craters previously catalogued by humans, the CNN almost doubled the final number – with 42 per cent of its results being new with a 11 per cent false positive rate. Again, this compares very favourably with fallible humans.

Hopefully it got to name one after itself.

One of the goals of the research is to create an algorithm that can be used throughout the Solar System, and to that end the team fed the CNN DEM data from NASA's deceased MESSENGER Mercury orbiter.

Despite craters looking rather different on Mercury compared to the Moon, the CNN was able to make a good fist at spotting them, while ignoring other terrain features.

Like all good science papers, the team ends with calling for more research and have published their crater-spotting code along with the training data used.

Readers with access to TensorFlow, Keras, a few spare CPU cycles and time on their hands might like to have a play. It is Friday after all. ®