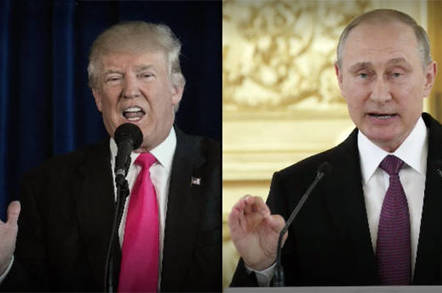 The US Treasury is freezing the assets of 19 people and five groups from Russia who launched cyber-attacks and interfered with America's elections.

The department said Thursday it was imposing the sanctions as retaliation for a number of shenanigans, from causing last year's NotPetya malware outbreak to meddling in the 2016 White House race.

The asset freeze, carried out under the Countering America’s Adversaries Through Sanctions Act and President Obama's executive order 13694, hits many of the individuals and groups named in last month's indictment from the Robert Mueller probe, as well as key members and branches of the Internet Research Agency – a propaganda-spreading group with close ties to the Kremlin – and known Russian military hackers.

The sanctions not only freeze the named individuals and outfits' accounts and holdings, but also blocks US citizens from doing any business with them. For what it's worth, many of the named and shamed miscreants were already subject to sanctions by Uncle Sam. It's the thought, as they say, that counts, though.

Treasury will finally punish Russian individuals who, for the most part, were already indicted or subject to sanctions. This from the President who said he was tougher on Russia than Obama. These sanctions will send a message to Russia, just not the one we want to send.

"The targeted sanctions are a part of a broader effort to address the ongoing nefarious attacks emanating from Russia," said Treasury Secretary Steve Mnuchin.

"Treasury intends to impose additional CAATSA sanctions, informed by our intelligence community, to hold Russian government officials and oligarchs accountable for their destabilizing activities by severing their access to the US financial system."

According to Mueller's indictment, the IRA and its employees were responsible for a disinformation campaign on Facebook and Twitter in the lead-up to the 2016 presidential election, as well as organizing real-world protests and activists in an attempt to spread discord and confusion and sway public opinion in the US.

The Trump administration has denied that it colluded with the Russian miscreants on the campaign.

In addition to IRA, the Treasury named Russia's state security intelligence organizations, the GRU and the FSB, in causing the NotPetya epidemic, tampering with elections, and launching cyber attacks on America and others.

"Specifically, the FSB has utilized its cyber tools to target Russian journalists and politicians critical of the Russian government; Russian citizens and government officials; former officials from countries bordering Russia; and US government officials, including cyber security, diplomatic, military, and White House personnel.

"Main Intelligence Directorate (GRU), a Russian military intelligence organization, knowingly engages in significant activities that undermine cybersecurity on behalf of the Russian government. The GRU was directly involved in interfering in the 2016 US election through cyber-enabled activities. The Russian military, of which the GRU is a part, was also directly responsible for the NotPetya cyber-attack in 2017."

Treasury officials are considering extending the sanctions beyond those behind the malware and election incidents, and include people involved in Russian efforts in the Crimea and Ukraine and the recent nerve agent attack on a former spy Sergei Skripal and his daughter Yulia in the UK. ®

Next page: Who exactly has been hit with sanctions, and why?
Page:
Tips and corrections
29 Comments

Czechia - coming soon to a map near you