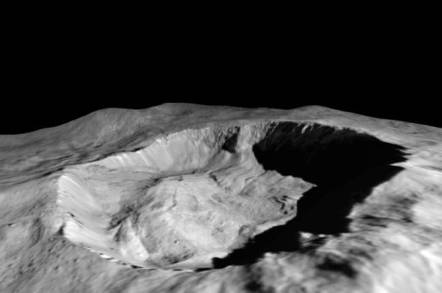 There is icy activity on the surface of dwarf planet Ceres, according to researchers studying observations from NASA’s probe, Dawn.

In news that will intrigue scientists and leave fans of science fiction series The Expanse* positively giddy with excitement, there is a sort-of weather system on Ceres resulting in ongoing changes to the surface of the jumped-up asteroid.

The "seasonal water cycle" in question is caused by Ceres moving closer to the Sun as it orbits, resulting in water vapour being released from ice in the subsurface.

However, rather than simply sublimating out into space, like the oceans boffins predict once covered the surface, the vapour condenses into ice in the shadows on cold crater walls.

Water ice cannot survive for long on the surface unless protected by the near-permanent shadow found in areas such as Ceres's Juling crater.

The warming of the surface appears to have also triggered landslides, exposing fresh ice crystals.

“This is the first direct detection of change on the surface of Ceres,” said Andrea Raponi of the Institute of Astrophysics and Planetary Science in Rome.

The observations, conducted from April to October 2016, showed an increase in ice on the shadowy northern wall of the 20km-wide Juling crater.

A second study, led by Giacomo Carrozzo of the Institute of Astrophysics and Planetary Science, found high concentrations of hydrated sodium carbonates on the surface, likely left behind when Ceres' oceans disappeared.

Ceres is the only planetary body, other than Earth, where hydrated carbonate has been found.

While more stable than water ice, hydrated carbonate will eventually dehydrate over millions of years. As such, the finding “implies that the sites rich in hydrated carbonates have been exposed due to recent activity on the surface,” according to Carrozzo.

Launched in 2007 and powered by an ion thruster, Dawn first visited Vesta before arriving at Ceres in 2015. The trusty NASA probe’s mission was extended for a second time in 2017 but the spacecraft is now running low on the hydrazine needed to maintain orientation after its reaction wheels failed.

Scientists hope to move Dawn from its current elliptical 24,000km orbit to one that will dive as close as 50km above the surface before heading back up to 4,000km.

Such a manoeuvre will likely exhaust the last of the fuel, with the probe ending its days in a circular orbit high above the dwarf planet later this year.

While the end of Dawn will yield some spectacular images and science, fear of contamination of Ceres’ surface means a Rosetta-style landing will not be attempted. ®

* Six million people living on a space station on Ceres, if you're not minded to click.