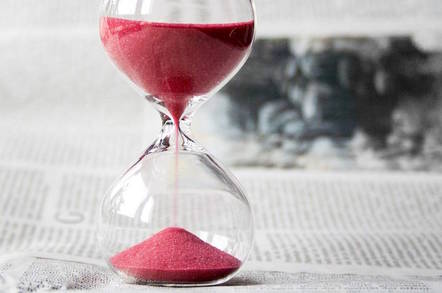 Can I have more time sir, please.

Supermicro, under threat of Nasdaq delisting for not filing recent quarterly reports on time, is negotiating fresh loan financing.

The San Jose-based server vendor said it was talking to the Bank of America Merrill Lynch about a new debt facility to refinance its current obligations.

The existing facility would have defaulted today, but Supermicro wants to extend it, enlarge it, and add new lenders.

Wells Fargo senior analyst Aaron Rakers said: "The expected increase in borrowing capacity [is] a potential indicator of Supermicro's confidence in forward demand," adding that Supermicro wants to reach a $5bn annual run rate in the next few years.

Supermicro's problems stem from it adjusting reporting and accounting of sales revenues going back several quarters, and its top sales leadership resigning, as well as replacing a CFO and two other senior execs.

Back in September 2017, Supermicro received a Nasdaq non-compliance letter as a result of a delay in filing its Annual Report on Form 10-K for the year ending June 30, 2017.

The delayed filing was due to a sales transaction recorded as revenue in Q2 of that year being pushed forward to Q3, making the Q2 numbers different from what had been reported.

This one transaction raised suspicions about others, and the audit committee initiated an independent investigation into whether there were any similar transactions and if so, whether they were properly accounted for. That’s why the 10K filing was and is delayed.

Supermicro has issued preliminary results for its second fiscal 2018 quarter, ended December 31, 2017, with revenues between $840m and $850m. There is still no final statement for the previous quarter or for the full fiscal 2017 year, due to the amount of investigation and analysis needed. It’s conceivable that previous fiscal year and quarter results may need to be restated as well. 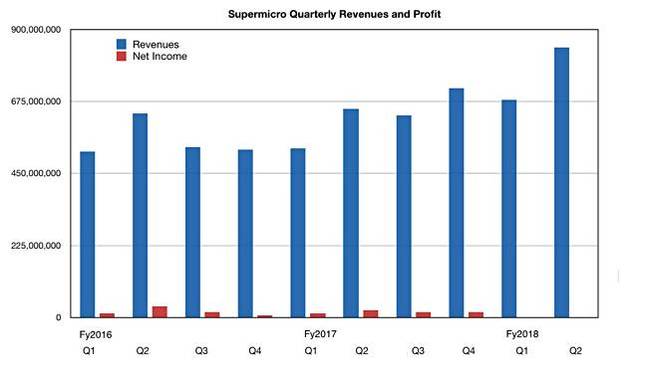 First quarter revenues for fiscal 2017 are also preliminary, at roughly $680m. There were no net income numbers made public for the first two fiscal 2018 quarters. 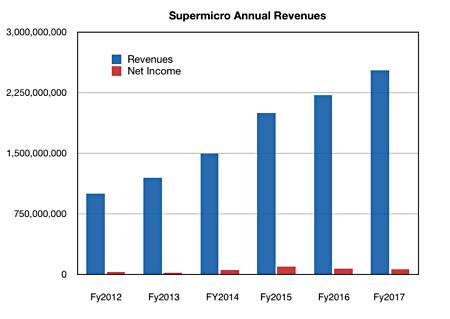 The annual numbers show a steady rise in revenues with regular profits.

Supermicro had been poised to break out of the “Others” category in IDC’s server rankings where the lowest individual vendor’s quarterly revenues was Lenovo with $861m in its third calendar 2017 quarter.

Both Inspur and Supermicro’s numbers grew year-on-year but Lenovo sales dropped 33.1 per cent, making it vulnerable to being overtaken.

Supermicro is adept at adopting new server technologies - such as the Intel and Samsung ruler and mini-ruler flash drive formats, where it has configurations on sale already - before the major server vendors including HPE, Dell, IBM, Cisco and Lenovo.

It has configurations supporting Intel’s Optane drives as well and we can expect it to be in the forefront of other fast non-volatile memory technology adoption, such as Samsung’s Z-SSD.

The company’s strategy is to adopt new server technology fast, such as Skylake CPUs and Tesla GPUs, and get design wins early by pushing out many product configurations to cover market sectors and niches. That’s served it well and the concern is that this financial sales reporting distraction could slow down its technology development pace.