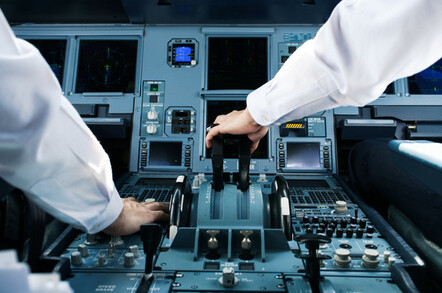 Exclusive Airbus is to shift its entire workforce to Google’s cloudy productivity and collaboration tools, ditching Microsoft Office on-prem wares in the process.

The “decision that will shape our company” was confirmed by Airbus CEO Tom Enders in a memo to staff – seen by The Register – who said the business is gearing up for the next phase of “digital transformation”.

“We need technology that actively supports our new ways of working, modern digital tools that allow us to be fully collaborative, to work across our many different team, across border and time zones - to truly be one.”

With this in mind, “Airbus has decided to take a major transformative step by moving from the Microsoft Office environment to Google Suite,” Enders said.

“Choosing G Suite is a strategic choice, a clean break with the past while assuring business continuity. Let’s embark together on this journey towards a truly collaborative enterprise,” he said.

For anyone living under a rock for years, G Suite is a line of web-based computing, productivity and collaboration tools that were initially launched under the Google Apps for Your Domain brand in 2006.

“We expect it to take up to 18 months to reach every one of our 130,000 employees but our teams are already starting to work on a plan which will involve you and of course our social partners,” said Enders.

“It goes without saying that assuring business continuity is an essential part of that play, as is training - you will have all the support you need. Many of you will be directly involved in the programme and I am confident you will embrace this move to a world where technology makes things just as easy at work as it does at home,” he added.

Enders described this as a “major change” designed to improve cooperation between employees, letting them access data from anywhere, at any time and on any device. This will, er, “break down silos with Google-Powered search,” he assured staff.

Of course, Airbus could have made the decision to shift to Office 365 but didn’t. We asked why it chose not to but have yet to receive an answer.

The shift to Google is clearly a massive blow to Microsoft, which warned resellers some nearly five years back not to compete with its nemesis on price because they would always lose.

In Google’s calendar Q4 , Google Cloud - comprising Google Cloud Platform and G Suite - turned over $1bn but the firm didn’t break down the sales by line. The company confirmed it had four million paying punters on G Suite.

Microsoft’s Productivity and Business Processes division, including Office and Dynamics, grew to $8.95bn from $7.17bn in its Q2 ended 31 December. Office 365 sales were up 41 per cent year-on-year but Microsoft didn’t specify from what number or to which higher number. Office subscribers stood at 29.2 million, according to CFO Amy Hood.

Airbus, which designs, builds and sells civil and military aeronautical stuff, including commercial drones, embarked on the first phase of the “digital transformation” project – you at the back, stop yawning – a year ago.

As detailed by McKinsey, Airbus updated its core infrastructure and has looked to ascertain how “digitisation” can improve processes, the business model and help it spin up new services. It plans to further develop machine learning and analytics nous to exploit customer data.

One example of this is a “data driven service” called Farmstar in which Airbus sends farmer data on fertilisers and watering fields, including overviews of how to improve crop yields.

“This is a standalone service. There are still farmers that are not connected to the Internet. They get paper versions of our analytics, and it works fine. But most customers are digital, connect to the platform, download the information, and use it for harvesting their fields,” Dirk Hoke, CEO of the defence and space units at Airbus was quoted as saying.

A spokeswoman told us that Microsoft will “politely decline” the opportunity to comment. Google has chosen not to gloat, by not responding to a call for comment. Airbus has yet to return with further comment. ®