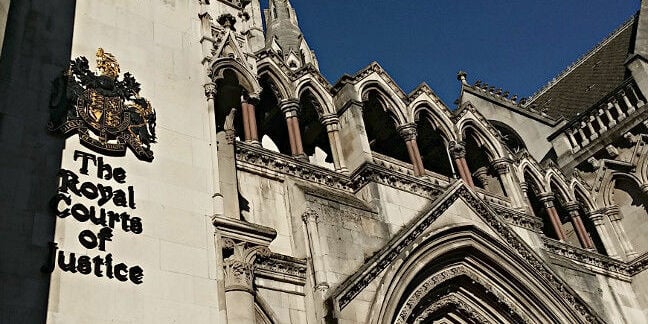 RTBF Trial The Right to be Forgotten trial has heard arguments on whether a man who gave interviews about his criminal past should be able to have those reports, among others, deleted from Google Search.

“The claimant in this case is a businessman who more than a decade ago pleaded guilty to an offence of conspiracy to intercept communications in a business context,” his barrister, Hugh Tomlinson QC of Matrix Chambers, told London’s High Court yesterday morning, adding that his client “was sentenced to a short term of imprisonment”.

The individual, that we must refer to as NT2 due to a reporting restriction order, pleaded guilty to conspiracy to intercept communications more than 10 years ago while he was running “a controversial business that was the subject of public opposition over its practices”. We are permitted only to name the firm as Delta. NT2’s conviction was deemed to be spent, under the Rehabilitation of Offenders Act, around five years ago.

He is suing Google for infringing his data protection and privacy rights, demanding the deletion of 13 results that come up when one searches for his name. His case has been linked by the court to that of NT1, who is also suing Google under the Right to Be Forgotten (RTBF). The RTBF was established in EU law, and therefore the law of England, by an EU court in 2014.

In his defence NT2 has asserted that he is “not a public figure”, whereas Google wants to show he was a high profile businessman. This is relevant thanks to a rather dense EU document on data protection, the Article 29 Working Party’s guidelines. Those guidelines include a statement that “business people” are public figures.

NT2’s legal team are trying to convince the court that he is not a public figure, as defined by the EU, because he is “not the CEO of a charity or NGO”. In essence he is arguing that there are different degrees of “public person”.

Of the 13 Google results that NT2 wants deleted, most are national news reports about his conviction, though a couple are from slightly later and relate to the nature of the offence of which he was convicted – and two are interviews that he himself gave about his crime. Another is an article on a local affairs website focusing on the purchase of land from NT2 by a local council.

Google’s barrister, Antony White QC, also of Matrix Chambers, cross-examined NT2 today, taking him through his business history from the events leading up to his conviction through to the modern day. The man himself wore a neat dark suit, his greying hair swept back from his temples. He had loosened his top button, letting his dark, patterned tie hang slightly limp around his collar, although Court 13 at the Royal Courts of Justice was slightly above room temperature.

NT2’s conviction came about because he hired a dubious private investigation firm on behalf of Delta, at the height of public interest in its activities.

“I accept I introduced [a private investigations firm] to Delta,” NT2 told the court. “I didn’t know, I wasn’t told they would use unlawful methods when I met them.”

Later, White suggested that NT2 had “consented” to the private investigations firm using unlawful methods, to which he replied: “My position was, I was aware and accept they used unlawful methods and that I condoned it. And as chair and chief exec, I did take full responsibility for it.”

If he was surprised at this volte-face, White didn’t give a single hint of it, instead saying, with the merest ghost of a West Country burr in his voice: “When I put to you they told you they would use those unlawful methods, you hotly denied that suggestion.”

The reporting restriction order in force for NT2 means we cannot say what or whom the private investigations firm was investigating because that may allow curious readers to figure out his identity. Suffice it to say that virtually every national newspaper, a number of news websites and most of the mainstream broadcasters took a very close interest in both Delta’s business activities and NT2’s conduct, particularly his sentencing.

Google sought to present NT2 as a hypocrite, particularly in light of the private investigation firm’s targets and how it alleges NT2 presents himself to the world today.

“Since his release from prison the claimant has continued to carry on in business including in financial and investment services and property ventures,” said Google’s written submission to the court.

The company added, in a summary of Google Specialist Stephanie Caro’s witness statement, that its “process for the assessment of delisting requests is not automated: it involves individual consideration of each request and human judgement. Without individual assessment the procedure would be open to abuse as individuals (and businesses) could seek to suppress search results for illegitimate reasons. Accordingly, Google does not have rigid rules that prescribe how delisting decisions are to be made.”

NT2 approached both Google and one of the national newspapers that interviewed him through his solicitors, Carter-Ruck, to ask for a takedown. Both refused; he pursued only Google to the court.

Next page: Giving interviews about your criminal conviction
Page:
Tips and corrections
116 Comments