Spring mini-statement for the UK: Who gets broadband cash etc 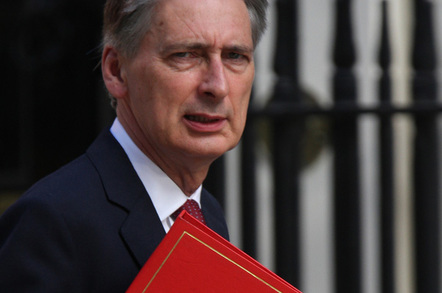 UK Chancellor of the Exchequer* Philip Hammond unveiled the first areas to receive £95m from the government's full-fibre fund and suggestions for how the UK could tax large digital businesses - in a slimmed-down "Spring Statement" light on details.

Describing himself as "positively Tigger-like" he also slipped in a joke about his colleague at the Ministry of Fun**. ”A new tech business is founded every hour somewhere in the UK. Apps like Citymapper and... Matt Hancock."

The £190m Challenge Fund to help roll out full fibre to local areas was first announced in the Autumn statement last year.

Now The Treasury has identified 13 areas in the UK to splash the first wave of £95m in funding under the Local Full Fibre Network (LFFN).

Its aim is for local bodies to use public sector connectivity and aggregate private sector demand to build and extend existing fibre networks in local areas.

Some of the projects to receive the green light included using hospitals, health centres and GP surgeries as “anchor tenants” - providing a full-fibre “hub” which surrounding homes and businesses could then also be connected to.

Others included upgrading schools, libraries and emergency response buildings to gigabit-capable full fibre connections, and "re-purposing" existing infrastructure, allowing full fibre to be rolled out at a cheaper cost.

During his statement, Hammond returned to the issue of taxing large digital businesses such as Google, Amazon and Facebook, also first raised in the Autumn budget.

“The speed and scale of the changes caused by digitalisation have naturally had implications for the UK tax system,” said The Treasury. “In some cases, there is scope to try and harness the benefits of technology to make the system more efficient for both taxpayers and tax administration.

“That’s why the government is releasing further publications at Spring Statement on using split payments to combat online VAT fraud and the role of platforms in encouraging compliance by their users.”

However, as that paper "does not look to set out the government’s final position on these issues", it is questionable how meaningful the proposals are.

According to the Treasury’s Spring Statement, “Digital technology has changed the way people shop, sell, and save. While cash will continue to be an important method of payment, more people are moving towards digital payments every year.”

It is therefore seeking views on what the government can do to support people and businesses who use digital payments, ensure that those who need to are able to pay with cash, and prevent the use of cash to evade tax and launder money. ®

* Equivalent to the finance or treasury minister elsewhere, for those who aren't familiar with how the kingdom rolls...

** The Department of Culture, Media and Sport (aka the "fun" stuff)