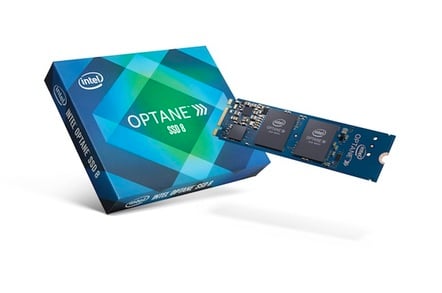 Intel's advised the product can be used "as a standalone SSD, in a dual drive setup or in a multiple SSD RAID configuration". Given the small capacities, The Register imagines the 800P will hardly ever be used alone, although perhaps the 118GB model could power a MacBook-Air-esque laptop as Apple ships that computer with just 128GB of flash storage.

The new products are also happy in the low-power states used by laptop computers, or Intel's own NUC mini-PCs.

Given the devices' keen prices - US$199 for 118 GB and and $129 for 58GB. - these new drives should make for some interesting new laptops once OEMs get to work.

Whatever the 800Ps land in, they'll offer speed: Intel's specs for the devices state sequential read up to 1450 MB/s, sequential writes up to 640 MB/s, random reads at up to 250,000 IOPS and random writes at the same speed. By way of comparison, conventional solid state disks hit around 500 MB/s and 75,000 IOPS. ®