Server sales dead? No sir, not in Q4 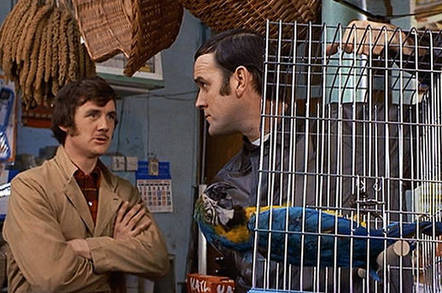 IBM revenues rose on the back of its POWER9 and z14 mainframe launches. Inspur's remarkable rise was visible with 127.8 per cent annual revenue growth; Chinese hyperscaler buyers no doubt contributing to that. 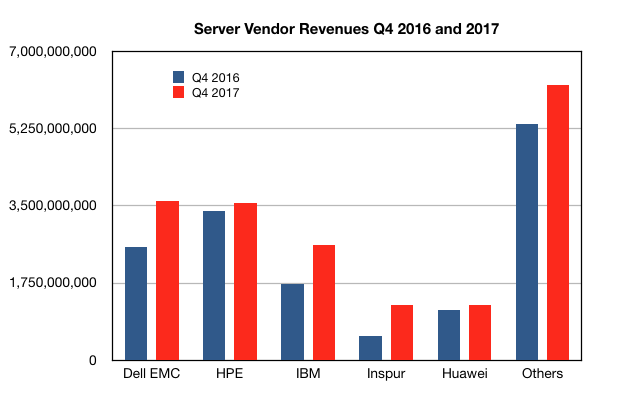 And a chart draws out the changes: 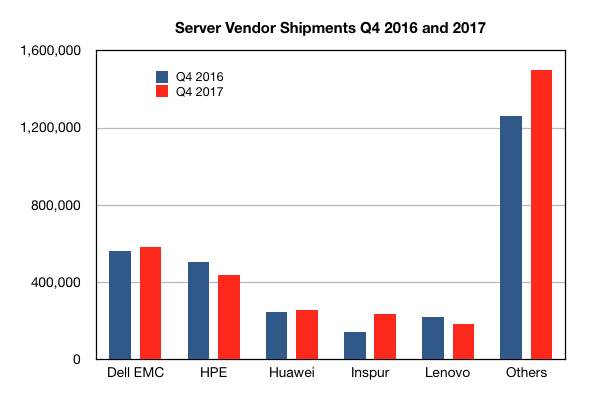 Lenovo is present although it was absent from the top-five vendor revenue listing. We can see both HPE and Lenovo server ship numbers declining while others rose.

IBM saw a massive server revenue hike from its POWER9 server and z24 mainframe refresh cycle, but was nowhere in the top-five vendor units list, preventing us from calculating its average server selling price (ASOP). Suffice to say it's bound to be monumental in size compared to the sub-$9,000 numbers from everyone else.

Dell EMC and Inspur ASPs rose strongly too; Huawei less so, while the Others category fell.

Gartner said the regional results were a mixed bag.

HPE retained the number-one spot but was flat year over year. Second-ranked Dell EMC saw strong growth but third-placed IBM was higher still. Inspur did not feature in the top-five EMEA vendor revenue list while Cisco did, in fifth place, after Lenovo at number four.

The unit numbers show the overall decline in the EMEA region:

Adrian O'Connell, a Gartner research director, said: "At first glance, the EMEA server market ended 2017 positively. The main driver for the revenue growth, however, remains the increasing cost of certain components due to supply shortages, with vendors passing that cost increase on to users." ®