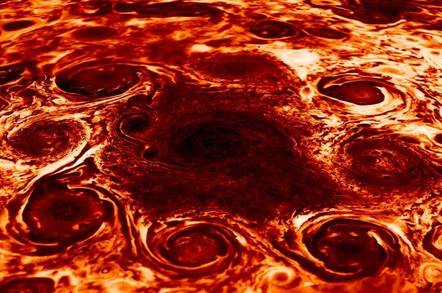 Jupiter has the strangest storm behavior observed to date, with formation patterns that have never been seen elsewhere.

The latest pictures taken from NASA’s Juno spacecraft reveal the hidden cyclones at its poles. At the north pole, eight swirling storms circled another storm at the center, and at the south pole, another five storms encircle a central vortex. These regions are not normally visible from Earth because of the planet’s low axial tilt.

The results have been analyzed in a paper published in Nature on Wednesday. It is one of four papers presented in the scientific journal detailing different parts of Jupiter, including its cluster of cyclones, gravity field, its interior, and atmosphere.

Morgan O’Neill, co-author of the cyclone paper and a postdoctoral scholar at the University of Chicago, said: “They are extraordinarily stable arrangements of such chaotic elements. We'd never seen anything like it."

She points to a similar behavior that emerged in the 1990’s when a group of physicists used electrons to model the motion of a chaotic, frictionless 2-D fluid as it cools. Small eddies would congregate together to form “vortex crystals” around a center.

The cyclical nature is down to the coriolis effect. When mass moves on a rotating body, it experiences a force that acts perpendicular from its motion and from the axis of rotation. In another paper, it is estimated that Jupiter’s turbulent atmosphere involves about 1 per cent of its total mass. 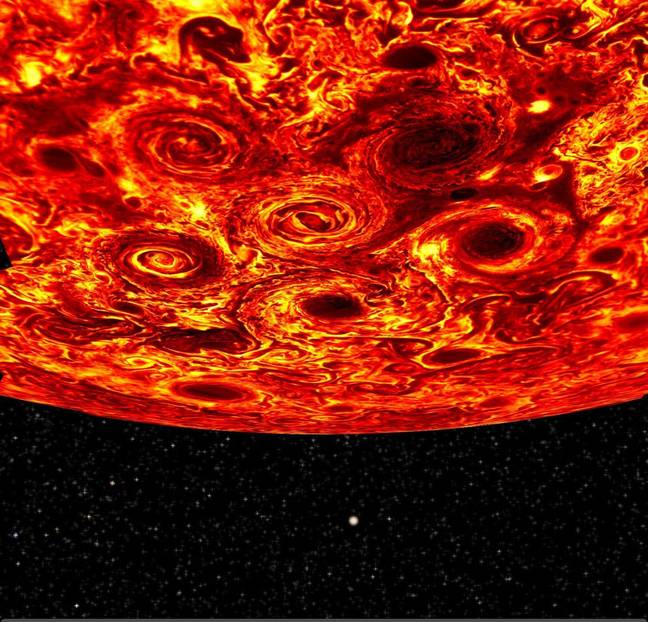 The storms at Jupiter's south pole arranged in a pentagon. Image credit: NASA/SWRI/JPL/ASI/INAF/IAPS

It’s unknown, however, how these storms hold their shape without merging into one another. How they were started and evolved to the current configuration is also unclear. At both poles, the cyclones are locked in polygonal formations. The north pole has an octagonal structure, and the south pole has a pentagon shape.

The next step is to build simulations to study the mechanics behind these storms. “Can you create a model that builds a virtual planet and predicts these flows? With further studies, they can understand the forces at play in the swirling storms,” O’Neill said.

JIRAM (Jupiter InfraRed Auroral Mapper), an infrared camera, and JunoCam, a visible light camera, snapped pictures when Juno passed close to the gas giant. Over the course of August 2016 to March 2017, the spacecraft carried out six flybys.

Juno was launched in 2011 and entered Jupiter’s orbit in 2016. It flies approximately 4,000 kilometers above the clouds and can zip from the pole to the equator in about two hours. It is expected to continue its mission until July, later this year. ®