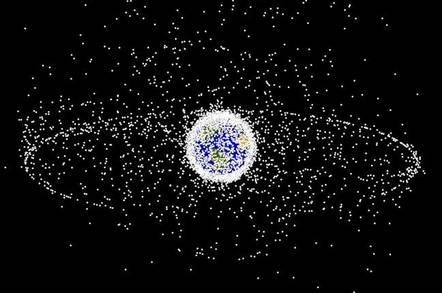 A physicist at the Instituto de Astrofisica de Canarias in the Canary Islands has proposed a way by which planet hunters might detect advanced alien technology.

Simply look for their junk in orbit.

Thousands of exoplanets have been discovered in recent years, and huge observatories such as NASA's James Webb Space Telescope (JWST) will provide unprecedented details of the atmospheric composition of exoplanets transiting their star.

However, while it is looking like humankind may soon be able to spot the biomarkers of exolife, spotting a technologically advanced civilisation continues to present a challenge. Astroboffin Hector Socas-Navarro proposes that rather than looking at the exoplanet itself, researchers turn their attention to the "Clarke Exobelt" (CEB).

This is an area around the planet touchingly named after Arthur C Clarke, who proposed using a geostationary orbit around the Earth for satellite communications in a 1945 paper.

Clarke, who is more famous for his science-fiction writing and met his own personal black monolith 10 years ago this month, would hopefully be tickled pink at his theory being used to detect aliens smart enough to launch stuff into orbit but perhaps not clever enough to get rid of it.

Satellites in geosynchronous and geostationary orbit around the earth, in the manner proposed by Clarke, are useful to humans for services such as telecommunications, Earth observing and geolocation.

Geostationary satellites have a position stable in reference to the ground. At 35,786km (22,236.39 miles) above the surface of the Earth, they do not appear to move.

A geosynchronous satellite, on the other hand, has an orbit in which it appears in the same place in the sky at the same time every day.

Socas-Navarro suggests that the limited space in the orbit will soon become quite crowded, with societal needs resulting in a distinct belt around the planet to cater for populated landmasses.

The opacity of this belt should eventually get to the point where it can be detected as the planet passes in front of its star.

Taking the Earth-Sun system as an example, Socas-Navarro calculates that at the current rate of exponential growth, the number of satellites in orbit will have increased from more than 1,700 to a number that would form a belt opaque enough to be observable in around 200 years.

To maintain the growth in launches, Socas-Navarro also makes a few leaps into the realms of science-fiction – speculating that another Clarke favourite, the "Space Elevator", would allow growth to continue by reducing the cost of access to space.

That kind of cosmic clutter would create its own problems, of course, and boffins hope to start dealing with what humans have already dumped in Low Earth Orbit in the near future before tackling the junk lurking higher up.

Orbital fastidiousness aside, a further problem with the theory is a false positive when observing a planet with a ring system.

To get around this, an assumption has to be made that rings (such as Saturn's) will be thin when viewed side-on and extend out from the planet while the CEB will be pretty much the opposite.

Socas-Navarro suggests that a sufficiently opaque CEB around an exoplanet could be detected using current instruments, giving researchers another tool in their search for alien life.

But only if those aliens are as careless with their orbital environment as us. ®