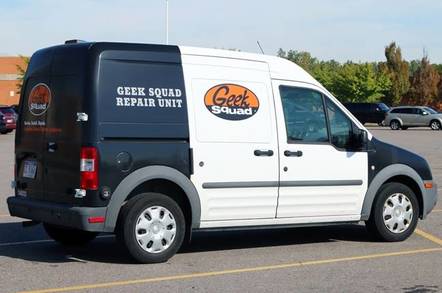 US tech retailer Best Buy has always denied having a relationship with the Feds, but the documents reveal frequent contact between them, including a 2008 guided tour [PDF] of the companies largest repair facility in Kentucky.

Another showed a $500 payment [PDF] to a Geek Squad staffer at the Kentucky plant for discovering data that led to an investigation. Last year Best Buy said any such payments would be "the result of extremely poor individual judgment, is not something we tolerate and is certainly not a part of our normal business behavior".

Some of these FoI docs indicate the FBI treated Geek Squad employees as informants, identifying them as "CHS", shorthand for "confidential human sources", said Aaron Mackey, staff attorney at the Electronic Frontier Foundation (EFF), which requested the data.

"In other cases, the FBI identifies the initial calls as coming from Best Buy employees, raising questions as to whether certain employees had different relationships with the FBI."

EFF obtained the files because it is concerned that having computer repair people conduct searches for evidence could violate Fourth Amendment rights on unwarranted search and seizure. These concerns were highlighted in the recent case of a doctor accused of possessing child abuse images.

In 2012 Dr Mark Rettenmaier, a prominent California gynecologist, took his HP Pavilion computer into the Geek Squad counter at his local Best Buy. A technician found what he thought was a child abuse image and called the Feds.

The FBI determined the image was of a known victim of child abuse and asked a judge for a search warrant for Dr Rettenmaker's home. There they found hundreds of images that were described by prosecutors as child pornography.

However, this unorthodox method of evidence gathering fell foul of the court. The FBI forgot to mention to the warrant judge that the file had been found in the unallocated space on the doctor's hard drive, meaning it could have been inadvertently downloaded or possibly deleted.

In May, US District Court Judge Cormac Carney ruled that this detail was crucial to the issuing of the warrant and threw out the evidence gathered against Dr Rettenmaker. He also viewed the original image, determined it was not pornography and upheld Geek Squad's right to search, but the case has been dismissed.

Although one of the documents [PDF] uncovered by the EFF showed handwritten FBI notes stating employees were never "directed" or "asked" by Best Buy to search for child abuse images, $500 is quite an incentive when you're paid on a per-hour basis. ®