Over 40? You've used one of these. Of course you have 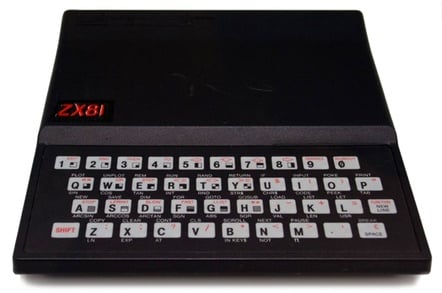 The ZX81 was launched 37 years ago this week as a £49.95 kit (£69.95 assembled) and introduced an entire generation to the joys of computing, fights over the family television and prodigious use of sticky tape.

Intended as a successor to the ZX80 (£79.95 as a kit and £99.95 with all the soldering taken care of-ish), the ZX81 improved on the previous model in several subtle ways.

Not blanking the screen when the user pressed a key was a good start.

Rocking a mighty Z80 processor clocked at 3.25MHz and 1KB of RAM, the ZX81 was arguably the first mass-market home computer to be available from high street retailers (such as WH Smith in the UK). Many a child would ensure a trip home from school took in a diversion to a local store in order to hammer the membrane keyboard with the lines:

Admittedly, many of the youths in my area would substitute "HELLO" for something a little more fruity, which would result in a harassed shop assistant frantically pulling a frayed power cord.

With only a 32 x 24 character display and no graphics mode to speak of (other than a 64 x 48 "pixel" mode) the monochrome output of the ZX81 required considerable imagination when playing games.

The lack of colour did, however, have the benefit of simplifying distribution in the US where colour differences between the UK PAL and US NTSC standards became a non-issue.

For many users, the ZX81 was a first entry into the world of programming. Magazines would publish reams of code to be laboriously entered before the user could spend a few happy hours playing "hunt the bug/misprint" and then be intensely disappointed with the results.

At least the membrane keyboard featured an early version of Intellisense, with commands and functions popping up while the user typed. A proficient user could rapidly fill the diminutive memory with only a few keystrokes.

The ZX81 designers employed some clever tricks to make the most efficient use of memory. Rather than use an ASCII character set, the computer stored commands as tokens in its own character set. This does have the unfortunate side effect of no lower case, making some listings feel more like the output of a Twitter troll when viewed today.

Games themselves were similarly limited. Chris Coates, now a design manager at Ubisoft, recalls cutting his teeth on the black plastic device: "You could play the Move the square across the screen game... the Assassin's Creed of its day! But it was easy to code... even idiots like me could use it."

David Dry, a director at Seco Creative Solutions, also took a quick dip in the nostalgia bath: "This was my first ever experience of an actual computing device more advanced than a calculator (ours had glowing red LED-segmented numbers), and I was entranced.

"My school friend (who owned it) loaded the game from tape, which again was a technical marvel beyond my young brain's capacity to comprehend. I literally expected to see the code written onto the magnetic tape, as if typed.

"Soon enough we bought our own, and I spent happy afternoons playing the small number of insanely basic games, which also led me to experiment with writing my own.

"Before we got the immense 16KB RAM pack it was very easy to write a program that filled the memory – 1KB of memory means literally 1024 characters could be stored. Which of course teaches a form of coding efficiency, even in naming variables."

With displaying a screen consuming 793 bytes of precious, precious memory, many users were quick to purchase a 16KB RAM pack from Sinclair or splurge on 32KB or more from manufacturers such as Cheetah.

Those same users soon found themselves making use of sticky tape, Blu-Tack or a handy stack of magazines to prevent the memory module from dropping out of the rear expansion connector, resulting in an unwelcome reset.

Third-party manufacturers were quick to work on improving the ZX81 experience, offering "real" keyboards, joystick adaptors and printers. Even a sound card was produced.

By the time the ZX81 (sold in the US as the Timex Sinclair 1000) was discontinued in 1984, 1,500,000 units had been sold. The computer had made the leap from the realms of enthusiasts and businesses into the home.

Thanks to Sinclair's innovative and frugal design, an entire generation were given access to a personal computer for the first time, and that generation have arguably shaped the computing landscape of today.

You can take a quick dip in the warm waters of your own nostalgia bath today with online emulators. Comment below to share your memories of the beloved plastic wedge. ®