So much for the supercycle 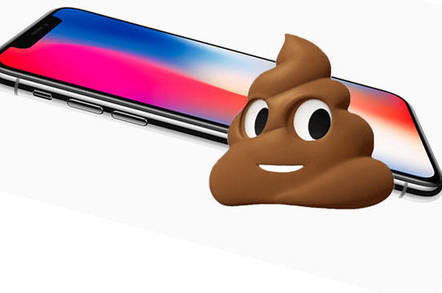 "The iPhone X cost twice [as much as my old smartphone] but isn't twice as good. It's for the Rolex wearers," concluded Alistair Dabbs after a fortnight with Apple's flagship.

And it seems many iPhone owners agree. 40 per cent haven't upgraded to the £999 X – and a third say it's because it's too expensive.

Piper Jaffray analyst Michael J Olson this week shared the survey of 1,500 iPhone owners who had not upgraded to the 2017 model. 31 per cent cited cost. 44 per cent said their existing iPhone works just fine.

Olson's poll was one of few to puncture the hype before the launch of the X. He found his panel were far less excited than the hyperventilating media, discovering anticipation for the X and 8 was about the same as for the 7 in 2016.

The iPhone X had been expected to kick off an upgrade "supercycle". However, Apple has reportedly cut back demand – by as much as 30 million units. The Financial Times yesterday confirmed that Samsung, the sole supplier of OLED panels, was cutting back production.

This doesn't mean the iPhone X is a flop – far from it. It's just that demand falls short of the galactic expectations that Apple had generated for the 10th anniversary model, which introduced the first new iPhone design in years. The lure of Apple's first OLED curved glass display, animated poo emoji, a fashionable notch, and Face ID just isn't enough to justify a £999 leap for many.

Olsen is still bullish about Apple's prospects this year, with the firm tipped to introduce both larger and cheaper X-style models, both including the fashionable notch.

Knocking 3.7 million off his earlier estimate, he tips: "Based on our survey, that suggests a large pool of potential iPhone buyers are looking for a larger screen or lower-priced option and may, therefore, wait until the next batch of devices is out late this calendar year, pushing a large percentage of upgrades into FY19. We are slightly lowering FY18 iPhone units, from 230 million to 226.3 million." ®