Fancy sitting in a Level 4 driverless car roaming London? Get in line

Latest trials will expose capital to delights of robot chauffeuring 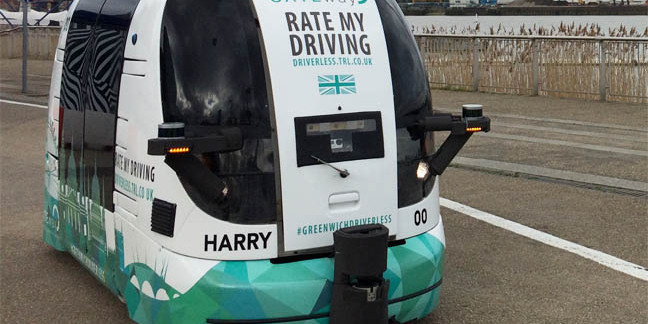 One of the Greenwich Gateway trials cars. Pic: Oxbotica

World+dog will be let loose with Level 4 driverless cars in London, the Greenwich Gateway consortium has declared.

The vehicles themselves have been trundling around the southeastern London borough for about a year, as part of a wider trial led by the Transport Research Laboratory (TRL) and the government.

For the next four weeks, some of the 5,000 local folk who registered in advance with the project will be able to have a go themselves at "driving" the vehicles – or, rather, sitting in them while the "pods" drive themselves around.

"This project is enabling us to discover how potential users of automated vehicles respond to them, in a real-world environment, so that the anticipated benefits to mobility can be maximised. We see driverless vehicles as a practical solution to delivering safe, clean, accessible and affordable mobility and we are proud to be part of creating our future transport system," said Richard Cuerden, TRL's Academy Director, in a canned quote.

Level 4 on the American Society of Automotive Engineers' standard scale of vehicle automation is the second-highest level; only level 5, or 100 per cent automation, is higher. In practice a level 4 vehicle is capable of handling "most" road scenarios it may encounter, though retains the capability to throw control back at the human if it can't cope.

"Developed by British companies Westfield Sportscars and Heathrow Enterprises, and controlled by a state-of-the-art automation system created by Fusion Processing, the pods have no steering wheels or typical driver controls," said a statement from the Gateway consortium. "Instead, Fusion's software, CAVstar, combines GPS with radar (for long range) and LIDAR (for close range) to enable the pods to detect and safely negotiate objects in their path."

The cars will navigate themselves around a 2.1 mile (3.4km) pre-set course. On board will be a "safety steward" who will take over in case of problems – though exactly how he will do this without a steering wheel could prove interesting.

Greenwich itself (the borough is far larger than the famous World Heritage site) has become a bit of a testbed area for autonomous vehicle trials, with the Move UK consortium also using a fleet of instrumented Land Rover Discovery SUVs for a data-gathering project. Automated delivery vehicles can also be found roaming the mean streets of Woolwich.

However, the London Assembly is, for now, dead against the inexorable rise of driverless vehicles. ®