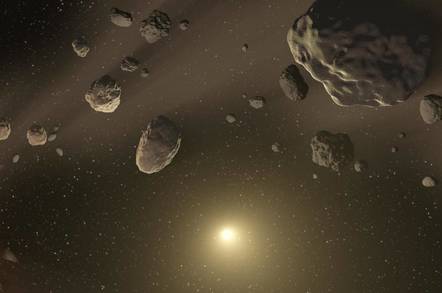 A team of researchers carried out a series of experiments to study how complex hydrocarbons, an important class of molecules needed to create the building blocks for life, formed in space.

Hydrocarbons, compounds made up of differing amounts of carbon and hydrogen, are common on Earth but also outside it. Some hydrocarbons, such as benzene or naphthalene, have been detected in meteorites floating around the solar system, leading scientists to wonder how they might have formed.

Now, a paper published in Nature Astronomy on Monday provides a possible answer. Researchers from the University of Hawaii at Manoa, University of California, Berkeley and Florida International University, have recreated pyrene, a hydrocarbon commonly formed during the combustion processes in car engines, in a lab.

Musahid Ahmed, co-author of the paper and a chemist at UC Berkeley, said: “Starting off from simple gases, you can generate one-dimensional and two-dimensional structures, and pyrene could lead you to 2-D graphene. From there you can get to graphite, and the evolution of more complex chemistry begins."

A pressurised mixture of 4-phenanthrenyl - a hydrocarbon with one unpaired electron - another hydrocarbon compound acetylene were injected into a microreactor from a nozzle at supersonic speeds.

Next, a beam of UV light was directed at the gas to ionise the mixture and simulate similar conditions to those found around a star. The loss of electrons kickstarts a series of reactions that eventually create pyrene. Since it requires other hydrocarbons to make pyrene, it doesn’t quite explain how the first hydrocarbons were created.

But, Ahmed, said he believes this process could explain how “some of the first carbon-based structures evolved in the universe".

Pyrene is part of a larger chemical group known as polycyclic aromatic hydrocarbons (PAHs) that are estimated to make up about 20 per cent of all carbon in the Milky Way. PAHs are composed of ring structures that are found in interstellar dust grains, leftover material flung from stars. They provide a chemical pathway for amino acids, peptides and sugars, some of the essential ingredients for life, to form.

Ralf Kaiser, co-author of the paper and an astrochemistry professor at the University of Hawaii at Manoa, explained to The Register that PAHs provide surfaces for other molecules like water, ammonia, methane, carbon dioxide or methanol to condense on.

“Molecules from the gas phase can condense on the cold grains - it's similar when water ice builds up in your ice box from the water in the air.”

After these molecules build up on PAHs like pyrene, if they’re exposed to ionizing radiation it can fire up another series of reactions to create amino acids, peptides and sugars.

The next step is to find out if these life-bearing molecules can be formed from ionising a mixture of hydrocarbon gases. "Is this enough of a trigger? There has to be some self-organization and self-assembly involved to create life forms. The big question is whether this is something that, inherently, the laws of physics do allow," Ahmed concluded. ®