Server shipments boomed in 2017's fourth quarter, with total revenues bouncing 26.4 per cent on the prior year and unit sales stepping up 11 per cent. Hyperscaler and cloud service provider customer buying patterns are causing tectonic shifts in the market.

IDC's Worldwide Quarterly Server Tracker said all parts of the market grew in Q4 but singled out demand from cloud service providers and hyperscalar buyers. It included this vendor revenues table: 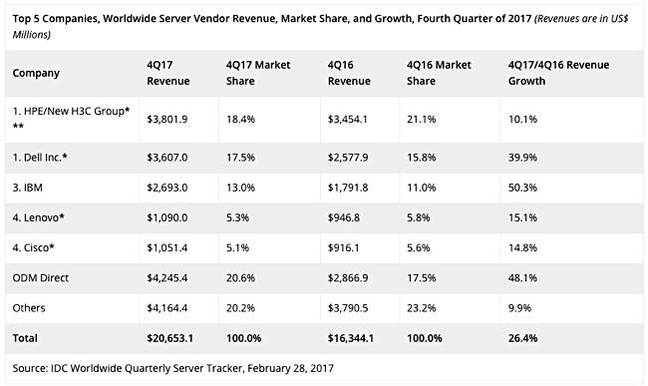 Dell's revenue growth at 39.9 per cent was substantially higher than both the market average and HPE's (10.1 per cent), which undergrew the market as did Lenovo, and Cisco.

The ODM Direct sector again reported a massive leap in factory revenues, this time round up 48.1 percent year-on-year.

IDC beanies said entry-level server revenue went up 21.9 per cent to $15.8bn, midrange leaped 48.5 per cent to $1.9bn, and high-end systems jumped 41.1 per cent to $2.9bn, driven by IBM's z14 launch last quarter. Take that away and the revenue rise would have been more in line with the unit shipment rise.

Looking at box sales, the picture was different with IBM for example, not figuring at all. 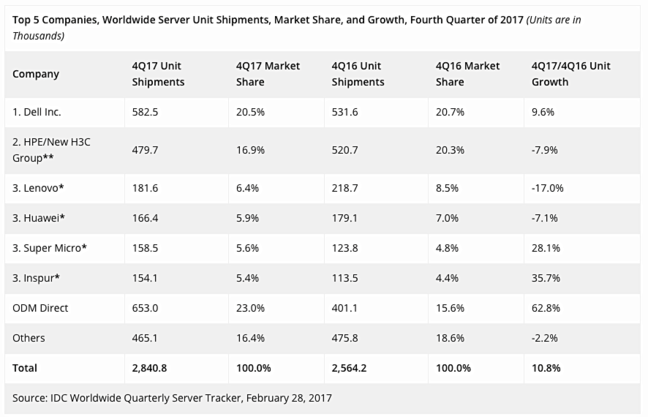 Here Dell topped the sales stakes (growing 9.6 per cent) with HPE shrinking 7.9 per cent, Lenovo declining 17 per cent, Huawei falling back 7.1 per cent. Supermicro grew 28.1 per cent, and Inspur shot up even faster at 35.7 per cent. Both Inspur and Supermicro's growth paled in comparison to the ODM Direct suppliers - which collectively bagged 62.8 per cent.

Looking back over previous quarterly trackers shows the remarkable rise of ODM Direct as CSPs and hyperscalers buy servers in bulk from them. Dell is keeping pace but HPE is falling back, particularly in the fourth quarter.

Having unit ships and revenue numbers for Dell, HPE and some others for 2017's fourth quarter, we were able to divide the one into the other and come up with some server average selling prices:

We don't have server revenue numbers for Huawei, Supermicro and Inspur, nor unit shipments for Cisco - and that's why there are no ASP numbers for these suppliers.

Sanjay Medvitz, senior research analyst, servers and storage at IDC, said: "Hyperscalers remained a central driver of volume demand in the fourth quarter with leaders such as Amazon, Facebook, and Google continuing their data centre expansions and updates.

"ODMs continue to be the primary beneficiaries from hyperscale server demand. Some OEMs are also finding growth in this area, but the competitive dynamic of this market has also driven many OEMs such as HPE to focus on the enterprise."

Can HPE be a volume server supplier to enterprises as server commodification continues, with Dell competing strongly, and suppliers like Inspur and Supermicro shooting up the rankings? One of HPE CEO Antonio Neri's challenges is convincing enterprise customers that HPE's higher prices are worth paying. ®