Deep in remote Oz, an antenna has 'heard' the oldest stars

And they're way too loud ... unless dark matter is involved 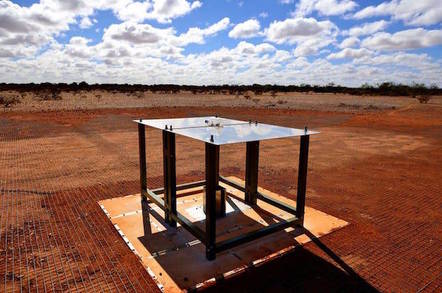 The EDGES instrument is 260 km from the nearest radio transmitter. Image: CSIRO

A group of US researchers working at a remote site in north-west Australia have identified signals from the oldest stars ever observed, born roughly 180 million years after the Big Bang.

The observation has also set astronomers a brand-new puzzle: the signal's too strong, and that might indicate an interaction between baryons (ordinary matter) and dark matter.

The research team, led by Dr Judd Bowman of Arizona State University, worked for 12 years, nine of them from the Murchison Radio-astronomy Observatory (MRO) site in Western Australia. In this paper in Nature, they describe a 78 MHz signal they believe dates from stars that formed 13.6 billion years ago. That would date the stars as among the very first that formed after the Big Bang.

The signal was hard to detect because 78 MHz is in a busy part of the radio spectrum, close to FM broadcasts, fixed radios and navigation beacons.

Dr Bowman created an instrument, the Experiment to Detect the Global EoR (Epoch of Reionization) Signature (EDGES) to seek these signals, and brought it to the Murchison site nine years ago seeking radio quiet.

EDGES has a relatively small antenna – a few square metres – coupled to a radio receiver and signal processor (there are two EDGES instruments at the MRO site). 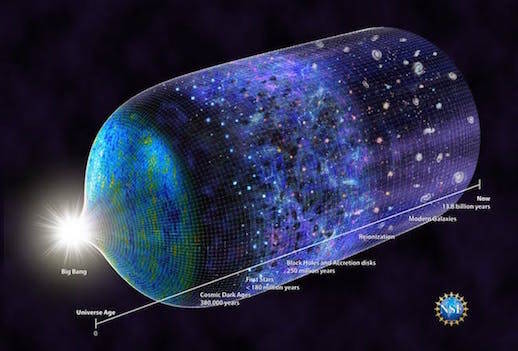 The evolution of the universe, according to the National Science Foundation. Image: N R Fuller

The signal announced today was detected in 2015 and 2016, but needed two-plus years of checking before the group could release its result.

The matter of dark matter

Detecting the stars at all was a feat: the light is too faint to be detected directly.

What EDGES detected was a signal given off by neutral hydrogen (one proton and one electron – non-ionised hydrogen) that made up most of the universe when stars first began to form. That hydrogen would be excited by the stars' energy, and would radiate at 1.4 GHz; 13-plus billion years' of redshift means today, the signal is at the frequency Dr Judd detected.

Hey, turn down that radio, it's alien season and we're hunting aliens

EDGES had to be able to discriminate that signal from the vast background noise of the universe, as well as getting rid of Earth-based radio waves (including radio signals bouncing back from the moon).

However, there's something wrong – and this is where dark matter might enter the picture.

As the National Science Foundation's (NSF's) Peter Kurczynksi explains in the video below, the signal EDGES found is twice as loud as astronomers expected, “meaning the absorbing gas in the early universe was colder than we thought possible”.

“There are only two ways an absorption signal against background radiation could be stronger than expected. One is if the radiation was brighter than we thought. There has been an unexplained radio background seen, but not at these frequencies, and we don’t know what could make so many radio waves at the time of the first stars. The other possibility is that the gas was colder than we thought, thus absorbing more of the background light. As far as we know, there was only one thing in the Universe at that time that was colder than the neutral hydrogen: dark matter.”

If there was such an interaction, heat could pass from the hydrogen to the dark matter. However, until now the only known interaction between baryons and dark matter has been through gravity, but that's not a strong enough interaction to explain the signal Judd found.

The implication of a dark matter interaction, Mack wrote, is that it represents a proof of the stuff's existence, which has been hard to find.

The dark matter analysis was published in a separate paper at Nature, by Rennan Barkana of the University of Tel Aviv.

Australia's CSIRO discusses the Murchison facility in this article. ®