Scientists change their minds, think water may be all over the Moon

Water, water everywhere, but not a drop to drink. Or fuel a rocket. Yet... 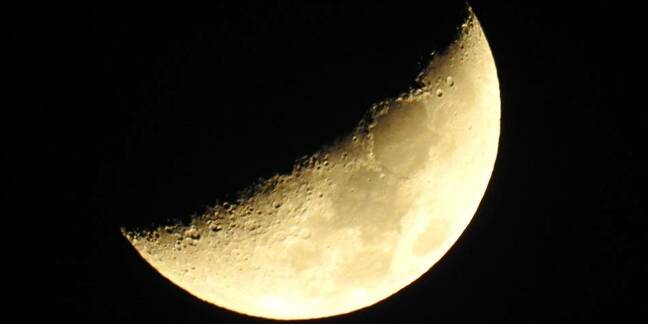 Boffins at the NASA Goddard Space Flight Center have announced that water on the Moon may be actually be more widespread over the surface than first thought, and less prone to moving about.

The process for actually extracting this water remains unclear and will need to be resolved before thirsty astronauts are to be refreshed, rockets refuelled and Soup Dragons can feed hungry Clangers.

Previous studies using data from NASA's Moon Mineralogy Mapper, an instrument on the Indian Space Research Organization's Chandrayaan-1 mission, concluded that there was water concentrated on the north and south poles of the Moon. The new results contradict those findings somewhat.

Lunar water itself has mainly been detected by measuring the light coming off the surface and looking for a spectral fingerprint near 3 micrometers. Obviously outside of the visible spectrum, but detectable by instruments able to spot infrared radiation.

Scientists had speculated that water molecules somehow migrated over the lunar surface to "cold traps" in craters at the north and south poles as the signal strength of the water changed with the waxing and waning of the Moon over the lunar day.

The difficulty comes from the fact that the Moon has a habit of heating up, which gives it a healthy glow that interferes with readings in that portion of the spectrum.

Boffins have therefore taken detailed thermal imaging from NASA's Lunar Reconnaissance Orbiter, which has spent the last eight years mapping the surface, and combined it with the Chandrayaan-1 data to pick apart the thermal interference from the water signature.

Chandrayaan-1 failed in 2009, less than a year into its two-year mission, but achieved the vast majority of its scientific goals. The data continues to be picked over by scientists.

Keen-eyed radar operators at NASA spotted the derelict craft in 2016, still in orbit.

The conclusion is that water is present both day and night, and is spread over the entire surface. It also suggests that the water molecules are unlikely to skip around as previously hypothesised.

Unfortunately for the aforementioned astronauts, rocket engines and fictional children's television characters, scientists are no closer to coming up with a way of actually getting to the stuff.

NASA's proposed Resource Prospector, a robot capable of roaming the Moon and sticking drills into it, would go some way to answering that question should it attract funding.

The finding will, however, help scientists understand how water may be stored on other rocky bodies in the solar system and provide more clues as to the actual source of the Moon's water.

The results point towards OH and H2O being created by solar wind hitting the lunar surface, although the possibility of the water coming from within the Moon itself (having been locked away when the Moon was created) has not been entirely ruled out. Hollow Moon theorists, rejoice. ®