Hello? Hello? Can you hear me?! 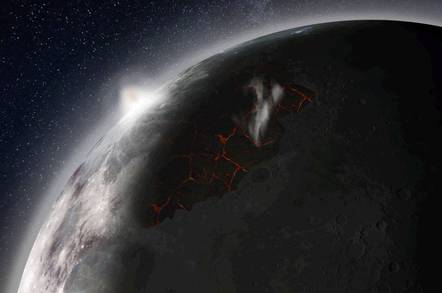 Vodafone and Nokia have joined forces to bring 4G to a barren, characterless expanse (no, we don't mean Surrey suburbia). From 2019 LTE will be available on the moon.

The network is intended to support a mission by Berlin company PTScientists, along with Vodafone Germany and Audi, to achieve the first privately funded Moon landing.

Mission to the Moon is due to launch in 2019 from Cape Canaveral on a SpaceX Falcon 9 rocket.

Vodafone's network will be used to set up the Moon's first 4G network, connecting two Audi Lunar Quattro rovers to a base station in the Autonomous Landing and Navigation Module (ALINA).

The base station should be able to broadcast 4G using the 1800 MHz frequency band and send back live HD video feed of the Moon's surface, which will be broadcast to a global audience via a deep space link.

Robert Böhme, chief exec of PTScientists, indicated this could be the first step toward inter-planetary migration.

"In order for humanity to leave the cradle of Earth, we need to develop infrastructures beyond our home planet. With Mission to the Moon we will establish and test the first elements of a dedicated communications network on the Moon.

"The great thing about this LTE solution is that it saves so much power, and the less energy we use sending data, the more we have to do science!"

Nokia chief technology officer Marcus Weldon added the aims have potentially wide-ranging implications for many stakeholders "and humanity as a whole".

Who knows what lies ahead next for mankind. Decent 4G on the train? No, that's ridiculous... ®