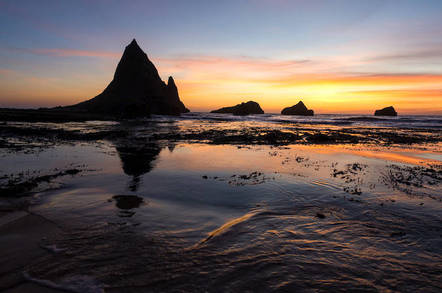 Analysis Billionaire venture capitalist Vinod Khosla is taking his legal battle to control access to a piece of California coastline to the US Supreme Court.

Here's the quick backstory. There is a public surfing beach south of San Francisco called Martins beach that's quite popular. To get to this seaside spot, you have to walk or drive over part of a 90-acre plot of land Khosla bought for $32.5m in 2008. The previous owners of the plot allowed folks to freely access Martins beach. Khosla, instead, closed a gate and locked it to block people from dropping by.

He was told by state officials he needed a permit to lock the gate. No such permit has been granted, yet the gate remains locked.

In a lengthy filing to the Supreme Court, the Sun Microsystems cofounder claimed he has been subjected to a "textbook physical invasion of private property" by being required to apply for a permit to lock said gate.

The petition challenges a 1970s law – California's Coastal Act – that requires him to obtain the permit, calling the process "Orwellian" and arguing that it threatens to "throw private property rights in California into disarray."

His appeal to the Land of the Free's highest court is the last possible step in a lengthy legal war going back nearly nine years, in which Khosla has lost case after case but continues to spend millions of dollars on lawyers in order to maintain exclusive access to the popular surfing beach.

In October, the California Supreme Court refused to hear his appeal against a unanimous appeals court decision from August that he had violated the Coastal Act by keeping the access gate locked. That appeal followed a similar decision reached back in 2014.

Throughout this saga, Khosla has kept the gate locked, opening it only on rare occasions that seem designed to bolster his legal case.

Shortly before the California Supreme Court snubbed his appeal, and the same day he was required to respond to the state's Coastal Commission before it decided whether to impose fines stretching to millions of dollars for blocking access to the beach, Khosla ordered the gate open, giving locals hope that the battle was finally over.

But, no, the gate was soon closed again, and in early January, Khosla's new lawyer – former solicitor general Paul Clement – applied to the Supreme Court asking for an extension to the cut-off date for an appeal. It was granted, and the deadline was yesterday, February 22, and the paperwork is in.

The odds are against Khosla: the Supreme Court only hears about 100 cases out of roughly 7,000 petitions each year. If it does decline, he will then be on the hook for fines amount to $11,250 a day – or $4.1m a year – for refusing to grant access to the beach.

In an effort to shake some sense into him, the California Coastal Commission has also threatened to backdate the fines, leaving him with a massive $20m bill to settle – nearly as much as the tens of millions he paid for the land in the first place.

But despite having lost every step of the way, it is not an open-and-shut case. The law does indeed raise difficult questions over private property and what rights the government should have over them.

It's fair to say that requiring a "permit" to allow "development" on his land – that development being the introduction of a lock – was a legal strategy developed in the face of Khosla's stubborn refusal to grant public access to the beach.

The situation is highly unusual. Californian courts, all too aware of his behavior and the depth of feeling against him in both the Coastal Commission and the state government in Sacramento, have refused to give him legal backing. But that could change at the federal level.

Even if Khosla does win at the Supreme Court, however, he still has to contend with a separate legal challenge against him that he has also been losing.

Back in April 2016, in another unanimous ruling, the San Francisco appeals court reinstated part of a lawsuit brought against Khosla that argued the land's former owners had granted a public right of access to Martins beach that he was not allowed to take back.

Khosla barred access to the popular Half Moon Bay surfing spot less than two years after buying the land, citing the cost of maintenance and liability. He also added armed guards and painted over a welcome sign.

The zillionaire stressed that although part of the beach is public property, the land connecting to it is private. When challenged over his closing of the access gate, he went to court and used an obscure old law to maintain the block. The law was later rescinded by specific new legislation and, in theory at least, the public can access the beach although the gate is often not open and Khosla continues to fight to be allowed to shut access off permanently.

Adding to the chaos, after Khosla lost his case back in August, the San Mateo County Sheriff’s Department said it will not cite anyone for trespass if they climb over the gate to gain access the beach.

And then there is the fact that in an effort to defuse the situation, the staff of the State Lands Commission spent two years in negotiations with Khosla's legal team to buy the small parcel of land that the beach's access road sits on. The commission calculated that the lands was worth $380,000; Khosla's lawyers demanded $10m.

That led to the commission's staff recommending that the organization use its extraordinary power of eminent domain and force Khosla to sell, but that strategy was squashed in a closed-door meeting by Lieutenant Governor Gavin Newsom, who didn't want to pick a high-profile fight with a Silicon Valley billionaire over property rights when he himself is running for governor of California later this year.

The sad reality is that Vinod Khosla is all too willing to expend a small amount of his estimated $1.75bn fortune to maintain his own private beach on the California coastline.

The cost to him since 2008 has been roughly $1m a year. If the Supreme Court refuses to hear his appeal and the Coastal Commission decides to impose its maximum fees, that would jump to more than $4m a year. But aged 63, he would still be in a position to use his vast wealth to block access to Martins beach for the rest of his life. ®