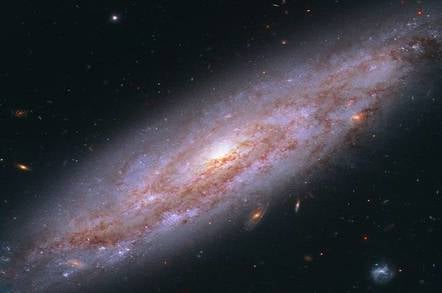 Astronomers at the Space Telescope Institute and John Hopkins University have used NASA’s Hubble Telescope to show that the universe is expanding a little bit faster than expected.

The Hubble Constant (how fast the universe expands with time) was predicted by the European Space Agency’s Planck observatory to be 67km per second per megaparsec (3.3 million light-years), shortly before the spacecraft was deactivated after a successful four-year mission.

The finding from Riess's team, at 73km per second per megaparsec, differs from Planck’s by 9 per cent – something that boffins have been unable to explain away through instrumentation or measurement errors. The results indicate that galaxies are moving at a faster rate than implied just after the beginning of the universe.

With a one in 5,000 chance that the discrepancy between the values is a coincidence, Riess explained that “it is increasingly unlikely that this is not a bug, but a feature of the universe”.

Such an explanation will likely soon be used by programmers everywhere as a reason for code blowing up with a ferocity not far off that of the big bang itself.

With a 2011 Nobel prize under his belt for the discovery of the expanding universe, Riess is well-placed to theorise on this latest discrepancy, pointing at that favoured bogeyman of cosmologists: dark matter, which may be interacting differently with normal matter than previously thought.

Other options include the effects of a new class of sub-atomic particle (known as dark radiation) travelling close to the speed of light and affected only by gravity, or dark energy shoving galaxies away from each other with growing strength rather than a constant rate of acceleration.

Any of the above theories would result in some rewriting of theoretical models concerning the behaviour of the universe and updates to the physics canon. The Register is prepared to bet a delicious pint of beer that the word ‘dark’ will be involved in whatever scientists come up with.

The team plans to continue using the Wide Field Camera 3 on the Hubble Space Telescope to further refine the discrepancy along with data from the European Space Agency’s Gaia satellite to achieve even greater precision.

The Wide Field Camera 3 was replaced during the first spacewalk of the final Hubble servicing mission, STS 125, in 2009, and NASA fervently hopes that it will last until the veteran space telescope finally meets its end, some time in the 2020s. ®