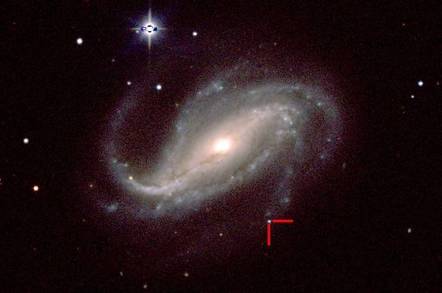 Published today in the journal Nature is a description of a rare and difficult to capture event – the birth of a supernova (and the death of a star).

Amateur astronomer, Victor Buso, struck lucky in September 2016 when he decided to test out a new camera attached to his 16 inch telescope.

Keen to make sure his new toy was working, he took a few pictures and checked the output. He noticed something that should not have been there. On the edge of the snappily named NGC 613 galaxy there was a pinpoint of light which grew in subsequent images.

The Argentine enthusiast had managed to catch a star in the act of exploding, creating a supernova.

Petrolheads may be disappointed to learn that a supernova is not a variant of the venerable Vauxhall Nova GSi, which transported many a 1990s teenager around town in style while leaving a trail of oil and engine parts in its wake - rather it is one of the last, violent, acts in the life of a massive star.

Professional astronomers have regarded capturing the initial burst of light following a star’s explosion as highly unlikely, rating the chances of having a telescope trained on the right part of the sky at the right time worse than 1 in 10 million.

Although with only 41 Vauxhall Nova GSi’s left on the road, seeing one of those may also present significant challenges.

Buso took his discovery to astronomer Melina Bersten at the Instituto de Astrofísica de La Plata in Argentina, who immediately contacted an international group of astronomers to survey the celestial object.

Structural and composition information captured in the very first moments of a star’s explosion cannot be obtained in any other way, and scientists were quick to train the Shane 3-meter telescope at the University of California’s Lick Observatory near San Jose, California, and the twin 10-meter telescopes of the W. M. Keck Observatory on Maunakea, Hawaii, onto the expanding supernova.

UC Berkley astronomer, Alex Filippenko, and his excited colleagues were able to obtain spectra and derive the composition of the star as well as the nature of the explosion.

The team estimate the star had a mass likely 20 times that of the sun, although had shrunk to ‘only’ 5 times before meeting a violent end.

Sadly for the discoverer of the supernova, scientists have selected ‘SN 2016gkg’ as an identifier for the object. Surely the ‘Buso Bang’ would have tripped off the tongue a little better. ®