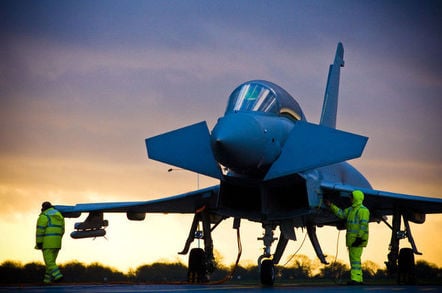 Instead the British government is lobbying Belgium to buy 34 British-built Eurofighter Typhoons.

Belgium is in the middle of a major revamp of its air force and is planning to replace the ageing F-16 fighter fleet, which were designed and built in the US.

Britain's BAE Systems manufactures the Typhoon jets, while the UK-based entity of European multinational missile builder MBDA makes most of the weaponry used by the Typhoon in Royal Air Force service. Now the Ministry of Defence is publicly lobbying Belgium to buy British, in much the same way as it flogged Typhoons to Qatar at the end of last year.

"Our world-class Typhoon has led the way in combat air power and this demonstrates the continued confidence in the capability the Typhoon has to offer. With more than 20,000 flying hours on global operations to date, the Typhoon offers unparalleled reliability and proven interoperability with our allies."

The MoD is also trying to tempt Belgium away from the Yanks by dangling "integration with the RAF's Typhoon support arrangements" as well as a "training partnership", which could mean an integrated UK-Belgium squadron of the sort proposed to Qatar. The latter caused some problems when a Qatari minister proudly announced that the joint squadron would "be protecting our skies during the 2022 World Cup. This is the purpose behind having an operational joint squadron."

That statement caused a lot of banging of heads in the UK, which proposed the unit primarily for training Qatari pilots and ground crews in sleepy Lincolnshire rather than patrolling Middle Eastern skies for airborne terrorists.

Also included in the deal is a proposal for Belgium to form "a National Network Cyber Centre, a Cyber Innovation Centre and a Cyber Research Partnership" with the UK, which may or may not trigger memories of the time Britain's GCHQ hacked Belgium's biggest mobile network operator. Belgium is HQ for the European Union, various NATO command and control facilities, and also for some of the UN's European presences.

Belgium has considered the F-35 since at least 2011, if a diplomatic cable published on WikiLeaks is to be believed. While a deal with Britain would unquestionably be good for jobs (and BAE's bottom line), nothing is confirmed. Though Belgium recently agreed to buy a converted Airbus A330 airliner as a flying tanker for NATO duties, the F-35 and the Typhoon cost roughly the same, give or take a few million (small change in the world of military aviation procurement).

Whether Belgium will buy the F-35 from the US or the Typhoon from the UK – a European, if not EU, partner – is up in the air. With the EU's military ambition gradually expanding with the European Defence Fund, it may be the case that Belgium picks the British option for political reasons. As the concept of EU armed forces (as distinct from member states committing units to EU command as required) approaches, with the bloc openly questioning the depth of the US commitment to defending the continent against potential Russian aggression, it may be the case that post-Brexit Britain wins a major contract from an EU nation state through simple self-interest. ®

Withdrawal limits mysteriously evaporated as someone lifted the loot

And you know what? The judge agreed with them