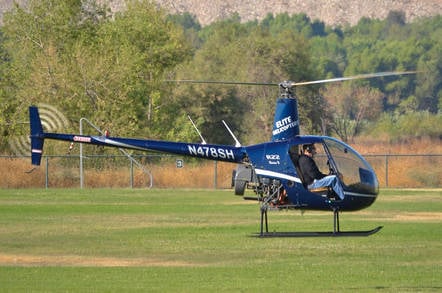 A Robinson R22 helicopter, similar to the one involved in the drone crash. Pic: Shutterstock

A helicopter has crashed after reportedly manoeuvring hard to avoid a "DJI Phantom quadcopter," in what could be the first confirmed aircraft accident involving a drone.

The crash was first reported this week by telly station Live 5 News, in South Carolina, USA, which saw a copy of a police report stating that a Robinson R22 helicopter struck a tree and landed on its side.

The Robinson, which is a typical basic training light helicopter, was being flown by an instructor and a student. The instructor reportedly told police that his student was practising hover taxi manoeuvring over rough ground on Daniel Island, a peninsula near the southeast US coast port city of Charleston.

During a turn, the instructor reportedly claimed he saw a white "DJI Phantom quadcopter" headed towards them. He took control of the helicopter, allegedly to evade the drone, but the aircraft's tail rotor struck a small tree. Though he got the helo down onto the rear of its landing skids, it then turned over.

The Federal Aviation Administration (FAA) is said to be investigating.

Though aviators and responsible drone operators alike have repeatedly warned for years that flying drones near other aircraft will lead to a disaster, and while several idiots have done that exact thing, this appears to be the first crash caused as a result of a drone flying near a manned aircraft, if the instructor's statement to police is accurate.

It is important to note that crashing a helicopter is a very expensive business that will not endear the pilots to the aircraft's owners or insurers. There was no information to suggest whether the local police had verified the presence of the drone, or identified its operator.

Bloomberg News quoted a statement from drone maker DJI which said: "DJI is trying to learn more about this incident and stands ready to assist investigators."

FAA investigations normally produce a detailed report of all the circumstances leading up to aviation incident. ®