Oh, Sales Guy! You're a riot 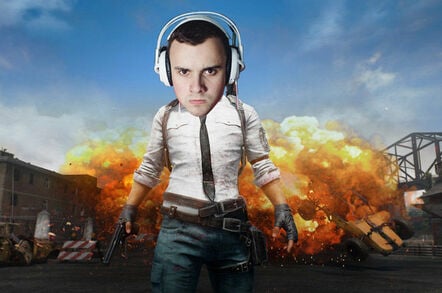 It's late on Friday afternoon and I’m having a couple of quiet beers with one of the local salesdroids.

Ordinarily the only reason I’d do this is that (a) they’re paying and (b) there’s a tube station relatively near that has extremely poor CCTV coverage. It usually starts with me discussing the kit they sold to someone higher up the food chain in the company than me, and then drifts along to getting their signature on a bit of paper cancelling the order. And then, well, no one knows.

“He seemed a bit despondent,” I usually say.

In this case, however, I’m drinking with Crazy Dave – so named because he takes a fairly heavy-handed approach to poaching where sales bonuses are involved – especially from within his own company. He has more than once purchased the PFY’s “stair oil” – a spirit-based lubricant that’s ridiculously slippery for 15 minutes after application but then dries to a tacky surface once the volatiles have evaporated, well before any forensics team might arrive on the scene.

“So what’re those new PDUs like?” the PFY asks, popping into the pub from the pub across the street where he’d been having a couple of quiets with Dave’s new assistant while I primed Dave with several pints of the local 7% heavy.

“Barge-pole material,” he snaps, pausing mid-sip. “The sockets are rated at 15amps but at 10 the internals heat up, the prongs get sloppy and your plugs fall out. Then it cools down and the whole process starts again. Though if you drive them at 12amps the plastic in the circuit breaker melts and they’ll be good for 20amps – till the plugs will start falling out – so it’s sort of self-limiting…”

“Oh yeah, you could beat someone to death with them but you wouldn’t want to use one,” Dave blurts.

“But your assistant showed us it working!”

“The one RICK showed you had the guts replaced – no breakers, copper contacts,” Dave insists.

“He said we could trial one?” I ask, recalling a section of his presentation.

“Rick SAID that,” he says, in a tone that hints that young Rick may well be starring in a Led Zeppelin-inspired incident in the near future, “but they’ll never let you have one because they're so bad. They’ll either sell you one with no warranty or some cretin at the call centre will upsell you our 6RU modular PDU – only slightly less rubbish but about 10 times the price.”

“There’s NO trial,” he repeats testily. “It’s a ploy to disrupt the existing supply chain by farming the sale process out to a call centre.”

“So why are you pushing the PDUs so hard?” the PFY asks.

“We HAVE to get stock numbers down before we can legitimately EOL them,” he admits, reaching for another pint. “There’s a pantload in a warehouse up north and we need them gone before the electrical safety laws change. Speaking of which, you didn’t buy any of those rack-top extraction fans from us did you?”

“AH!” he replies, finishing his pint in record time. “Apparently the fan blades were poorly balanced and the vibration cracks the insulation on the coils over time. Best case scenario the motor burns out; worst case it’ll trip out the rack circuit breaker.”

“So what’s your approach to server rack hotspots going to be if not extraction fans?” the PFY asks, knowing full well that extraction fans are the most advanced cooling technology they have.

“Put your sensitive gear down the bottom of the rack,” he admits. “We’ll pay some academic to fake some rack heat stats, publish a white paper called ‘Locational thermal efficiency curves in server farm environments’, then market it as our green initiative – before EOL-ing the fans to avoid warranty claims – like yours.”

“EOL sounds so much better than RECALL doesn’t it?”

“Yes, but we’re saying it’s our Company’s commitment to climate change awareness. We’ll lose the spares in a terrible over-insured shipping accident and upsell existing clients to something newer.”

I detect no remorse at all in Dave.

“So I take it your trainee doesn’t know all this?”

“Rick? Nah, he’s an intern and wants to be a process streamlining strategist – whatever the hell that is...” Dave foams. “So... are you interested in anything you saw today?”

“Those little UPS units I showed you aren’t the worst thing we’ve stocked. We’ve overstated the figures – everyone does – but the electronics are solid. Slap new batteries in them after a year or and they’d probably do you far better than a big name unit.”

“Can we order them online?” the PFY teases.

“Only Rick said we could use the websi...” the PFY starts.

“YOU CAN’T USE THE BLOODY WEBSITE!” he gags angrily.

“He said he could get us a discount if when he signed us up to your ordering portal...”

And just like that, Crazy Dave is gone. Pausing only to stop at his car to retrieve the demonstration PDU from his back seat, he stalks off in the direction of the pub that young Rick was meeting his mates at.

It was all lies, though. I think the PFY’s entire conversation with Rick was about PUBG play strategies.

His big mistake was showing the PFY several screenshots of “losers” he had “deep-sixed” with his “S12K”.

I noticed the PFY got a bit twitchy at Rick’s description of how he beat a loser named StephenP007 to death with the frypan.