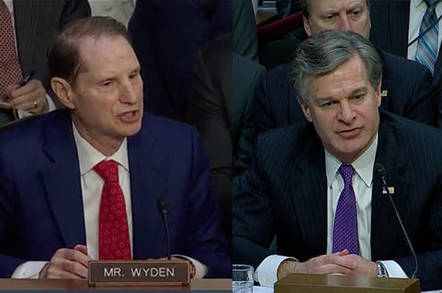 Four cryptography experts have backed a US Senator's campaign to force the FBI to explain how exactly a Feds-only backdoor can be added to strong and secure encryption.

All four this week signed a letter [PDF] to Senator Ron Wyden (D-OR) applauding his "effort to find out with whom the bureau has been consulting and which cryptographic experts believe an exceptional access system can be built securely."

Late last month, in response to a speech given by FBI director Chris Wray in which he argued that tech companies "should be able to design devices that both provide data security and permit lawful access with a court order," Wyden sent a memo [PDF] to the bureau boss taking issue with his position.

Calling the idea of introducing backdoors into software a "flawed policy that would harm American security, liberty, and our economy", Wyden noted that "experts are unified in their opinion that introducing deliberate vulnerabilities would likely create catastrophic unintended consequences."

He asked Wray to produce a list of the eggheads the FBI was talking to about designing such a system, giving a deadline of February 23. The letter from the four cryptography experts is seemingly designed to bolster that request.

"The FBI is asking engineers to design a highly complex, yet secure, system," the crypto-boffins noted in their missive. "Just because a non-technical person believes that such a system can be developed does not make it so. In fact, and as your letter notes, many experts have warned that security would be weakened by exceptional access mechanisms."

Therefore, they argue, it is "extremely important" that the FBI reveal "which cryptographic experts believe an exceptional access system can be built securely."

The letter also stresses that "instead of vague proposals that sound reasonable yet lack details, the FBI needs to present the cryptographic research community with a detailed description" of what is being proposed in order to allow it to be analyzed "in an open and transparent manner so that its advantages and disadvantages can be weighed."

The FBI is unlikely to do so because it is a virtual certainty that cryptographers, mathematicians, and engineers will be able to find a flaw in any system that knowingly introduces a secret hole. The insistence that such a system is even possible while still remaining secure has its own term: magical thinking.

The FBI is also unlikely to release the names of those it has been consulting over fears that they would be ridiculed and come under pressure from their peers not to work on such an approach.

However, Wyden's refusal to accept the vaguely ridiculous impasse that exists between law enforcement and technology companies is to be applauded. For several years, technology giants have argued that they are not able to securely introduce a backdoor into encryption software without also making it potentially accessible to criminals, hackers, foreign spies and other malicious actors – a flaw is, after all, a flaw.

In response, law enforcement and some politicians – in Europe and the United States – have repeated the same argument almost verbatim: that they are sure that the "brilliant brains" at tech companies can come up with a solution that will work.

As we noted last month, the reality is that those in favor of backdoors are just treading water until something happens that causes a shift in public opinion – most likely a terrorist incident – and allows governments to insist on backdoored communications and file storage.

Until that happens, the FBI, Five Eyes intelligence agencies, and the UK's Prime Minister will keep insisting that such a solution is possible in order to prevent the issue from being settled in people's minds. The impasse is likely to stay in place for some time, despite Wyden's best efforts. ®