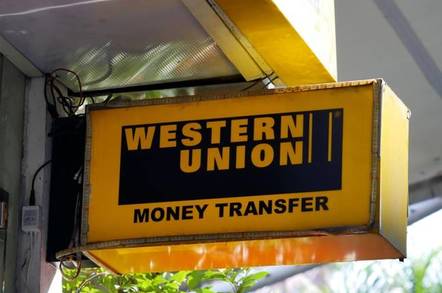 Western Union has confirmed one of its IT suppliers was hacked, and that customer information was exposed to miscreants.

A Register reader, who wished to remain anonymous, showed us a copy of a letter dated January 31 that he received from the money-transfer outfit. The missive admitted that a supposedly secure data storage company used by Western Union was compromised: a database full of the wire-transfer giant's customer records was vulnerable to plundering, and hackers were quick to oblige.

"We have discovered that some of your information may have been accessed without authorization as a result of a computer intrusion against an external vendor system formerly used by Western Union for secure data storage," the letter read.

"We promptly moved our external secure storage to a different vendor's system. We immediately notified law enforcement, and are actively cooperating with its investigation. Expert assistance was also immediately engaged to determine what personal information may have been compromised."

In other words, it sounds as though a cloud-based or off-site backup storage provider was hacked. Now that system has been shut down, the cops alerted, and digital forensics teams are probing the network intrusion.

"Upon detecting suspicious activity, Western Union permanently discontinued all use of the vendor's system and the system was taken offline," a spokesperson for Western Union told The Register today.

"Western Union took immediate action upon learning of this intrusion to notify law enforcement authorities. The company has notified affected individuals and regulators as appropriate. Affected individuals received a customized notification that explains the specific types of his or her personal data that may have been affected."

El Reg tweeted a redacted copy of the letter earlier this week:

@WesternUnion has been sending out letters warning of a computer security hack, blaming 3rd party data storage. Which vendor could it be? pic.twitter.com/W8L5ZOadTx

The red-faced biz was quick to point out that none of its internal payment or financial systems were affected in the attack. It also isn’t saying who the third-party storage supplier was, giving other customers of the slovenly provider time to check whether or not they have been hacked too.

Western Union says that, so far, it isn't aware of any fraudulent activity stemming from the data security cockup, but just to be on the safe side it is enrolling affected customers in a year of free identity-fraud protection. ®