See that over Heathrow? It's not an airliner – it's a Predator drone 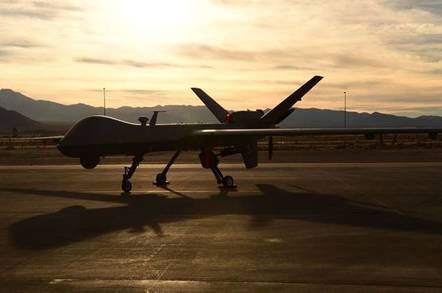 Military efforts to approve the flying of Predator military drones through Britain’s skies could pave the way for point-to-point drone deliveries, newly disclosed correspondence has revealed.

The detailed discussions, held between various Ministry of Defence (MoD) agencies and the Civil Aviation Authority, took place to enable the flying of Predator drones in UK airspace. While the military initially hoped they could fly their Predators (quaintly renamed “Protector” in 2016) everywhere, discussion with the CAA led to their ambitions being scaled back.

Unmanned aircraft technology is posing an increasing challenge for regulators as the hype and excitement of the tech world meets the hard and unforgiving laws of aviation – and of physics.

Referred to in the documents, as obtained by campaign group Drone Wars UK, was the government’s “strategy aspiration for Beyond Visual Line of Sight (BVLOS) flying for all Unmanned Aerial Vehicles by 2020.” This forms part of its otherwise rather quiet Pathfinder Program for drone technology. Approving BVLOS is the Holy Grail for aviation regulators because it unlocks the door for businesses to start commercial-scale unmanned deliveries of the type proposed by Amazon.

Similarly, “anywhere, any time” BVLOS with aeroplane-sized drones, as the MoD wanted regulatory approval to carry out, would be a genuinely revolutionary development for the freight sector. While the main missions for Predators are spying on people and dropping bombs on them, the aviation technology aspects are a fascinating insight into the drones of tomorrow.

It is wise not to lose sight of the MoD’s ultimate aim for its unmanned aircraft, as Drone Wars UK warned.

“There is little sign in the papers of anyone suggesting the need for a proper parliamentary or public debate about the implications and impact of flying large military drones within the UK other than the acceptance of a need for a ‘communications strategy’ to persuade the public to accept such flights,” said Cole.

Six of these – A to G, minus F – are in use in the UK today. Classes A-E are “controlled airspace”, meaning you need ATC permission to fly through it. The level of control is highest in Class A airspace and lowest in Class E. Class G is uncontrolled airspace, where the principle is “see and avoid”. You don’t need permission to fly in Class G – and, equally, there’s nobody on the end of a radar scope keeping an eye out for other aircraft approaching yours, either.

Flying drones through Class G airspace is a highly challenging problem because drones do not comply with the “see and avoid” principle. Put simply, if there’s no human in the drone to see what’s going on around it, it can’t avoid crashing into other aircraft. So far nobody has yet demonstrated anything superior to the Mk.1 eyeball and pilot, in terms of avoiding the “bloody hell we’re going to crash, pull up NOW!” scenario, though nobody disputes the inherent flaws of human look-out abilities.

Though military drones such as the troubled Watchkeeper are currently flown BVLOS in the UK, this takes place by declaring the skies around West Wales Airport, Aberporth, the main Watchkeeper operating base, a restricted area for all other aeroplanes. While a Watchkeeper test flight did take place from Aberporth to Farnborough, The Register understands that this relied upon a temporary corridor of prohibited airspace for the drone to fly through, something clearly impractical for routine flights.

For now, air traffic controlled flights only. For the future...

The CAA eventually handed direct oversight of the Predator flying programme to the MoD’s MAA self-regulator. In turn, the MAA settled on authorising Predator flights “in UK class A-C airspace, separated from manned flights”, with deviations outside that controlled airspace only permitted for landing at military airfields.

Further to that, a corridor of sky between RAF Waddington (presumably the future home of the RAF’s Predator drones) and the nearest Class A-C airspace will be temporarily restricted to other aircraft so the drones can take off and get into a controlled airspace corridor. The Predators will be fitted with a “detect and avoid” system and various other systems designed to broadcast its presence to other aircraft fitted with suitable receivers.

What this means for the wider commercial drone sector is significant. In principle, a large drone can now be flown remotely along the same airways as airliners (subject to the usual airworthiness and separation rules). Though the cost advantage of removing the human pilot is shifted sideways to the ground crew (military drones are typically flown by a ground crew of three to four people), the regulatory ability to operate remotely piloted aeroplanes has opened the door for others to build upon this.

"Putting drones into Class G airspace still needs work from the technical point of view," a CAA spokesman told us.

Three years ago the Watchkeeper drone fleet was approved to enter controlled airspace in the UK. Not much seems to have happened on the BVLOS front since then, and naturally the process resets itself for a new aircraft. But it is a path that has now been trodden a few times – enough, perhaps, to pave the way for others.

Could we see point-to-point hub deliveries by drone enabled by this development? Will future military drone integration efforts see the Holy Grail of Class G BVLOS being reached? Which will be the first company to turn this into a commercial reality in the UK? ®