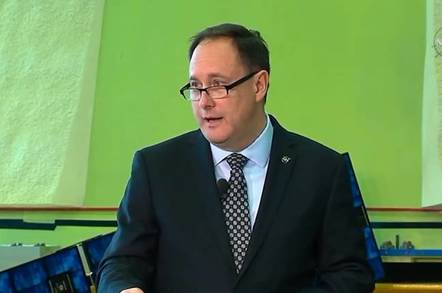 NASA boss Robert Lightfoot stands in front of the green screen they used to film the Apollo Moon landings, am I right?

President Trump's administration has handed down a budget for 2019 to NASA – and it effectively kills off key projects in exchange for a vague promise to go back to the Moon.

For the year, America's space agency has been awarded $19.9bn, around $500m more than the previous year, albeit with significant changes of focus. The new budget [PDF] will trigger an internal reorganization, and a rethink of NASA's role.

The agency's department of education, which inspires kids into science and technology careers, will be eliminated. Five climate studies are also axed, the Wide Field Infrared Survey Telescope project is dead, and funding for the International Space Station will be cut off in 2025.

In return, the US government wants NASA to focus more on exploration, especially getting humans back on the Moon and eventually to Mars. The agency is planning to put a manned habitat in orbit of the Moon by the middle of the next decade and to use it to send prospecting probes down to the surface to hunt for useful minerals.

"We will begin to build the in-space infrastructure for long-term exploration development of our nearest neighbor by launching the power and propulsion element to orbit the Moon as the foundation of a Lunar Orbital Platform-Gateway," acting NASA administrator Robert Lightfoot said during a Monday press conference.

"This will give us a strategic presence in the lunar vicinity that will drive our activity with commercial and international partners and help us further explore the Moon and its resources and translate that experience toward human missions to Mars."

Delivering the astronauts to the Moon will be done by a combination of commercial space vehicles and NASA's Space Launch System (SLS), a massive non-reusable rocket still under development. The SLS will get enough cash to operate its basic launch system that can handle decent-sized payloads – that's up to 70 tons – but not enough dosh for upgrades to heft much larger loads into orbit.

Lightfoot predicted that by 2030, NASA will have collected samples of Martian soil, and will be working on ways to bring them back to Earth, while exploring the Moon for valuable minerals.

He also predicted that, here on our planet, low-noise supersonic aircraft developed by NASA will crisscross the skies, and drones will be fully integrated into our transport network using air-traffic control systems developed by the space agency. And yes, we'll all have flying cars.

"Urban air mobility will be a common mode of transport – yes you'll have your Jetson car," he predicted.

And now the downsides

While the pie in the sky stuff is nice, let's look at what NASA is going to have to cancel to make it happen.

First off, the $3bn requested for the next generation Wide Field Infrared Survey Telescope (WFIRST) has been turned down. The space telescope, which would have had a field of view of the sky that is 100 times larger than images provided by the Hubble Space Telescope, is now officially dead in the water.

Rather than examine how we're treating the planet, today's White House – which reckons climate change is a hoax – wants NASA to look outward and focus less on matters here on our home world. In addition, as we said, NASA's Office of Education has also been defunded.

Finally, the budget confirms that funding for the International Space Station will only be maintained until 2025, and after that a number of options are being looked at. One report suggests Trump wants to privatize the space station, and sell it off to commercial concerns, but there's a problem with that idea – America doesn't own the ISS.

Certainly, the US is a major investor in the station, however, it's jointly owned with Europe, Russia, Japan, and Canada. Selling off the US stake will require complex negotiations with other partners.

The plans didn't get much support from former shuttle payload specialist Senator Bill Nelson (D-FL), who said the budget was a "nonstarter."

"The proposal would also end support for the International Space Station in 2025 and make deep cuts to popular education and science programs," he told his local paper. "Turning off the lights and walking away from our sole outpost in space at a time when we're pushing the frontiers of exploration makes no sense." ®