But cryptocurrency not growing for the GPU giants 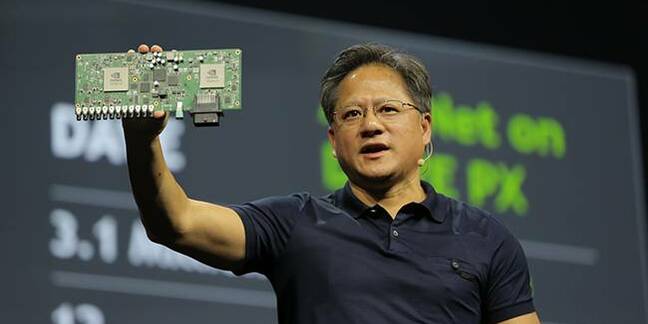 Huang whips out his ancient hardware

Nvidia’s grip on the GPU market continues to strengthen as it reported its excellent quarterly and full year revenues compared to last year.

CEO Jensen Huang told analysts in an earnings call on Thursday that the results were “a record quarter wrapping up a record year”.

Huang also spewed his usual monologue on the wonders of AI, his thoughts on how everything that moves will eventually be automated - and, therefore, must use GPUs, and improving graphics in computer games.

The only area where growth was “approximately flat” was cryptocurrency, an area where people are increasingly turning to custom ASIC chips. Nvidia said it managed to “meet some demand,” but the change was “difficult to quantify.”

For the fourth quarter of fiscal 2018:

In AI, the biz is mainly known for its GPUs needed to train complex neural networks faster. It is increasingly looking to pocket some cash from the inference stage - where models are tested with unseen data - by expanding its data centers.

Many cloud providers now offer its Tesla V100, the GPU at the highest end dedicated for deep learning workloads. Another area boosting its revenues is the rise of high performance computing and AI.

Jensen said the firm is looking at supercomputer clusters to slash training times. There have been a flurry of research papers that introduce large mini batch training methods that use hundreds of GPUs to decrease training times on datasets such as ImageNet to an hour or minutes, down from days using older technology.

Nvidia's shares dropped by as much as 4.93 per cent at time of writing after it announced its financial results. The GPU giant is expected to rake in $2.9bn, give or take 2 per cent, in revenue in the next quarter of the fiscal year. ®