Home taping revisited: A mic in each hand, pointing at speakers

A blinga, a blanga, a bippety bop, I'm going down to the record shop YEAH! 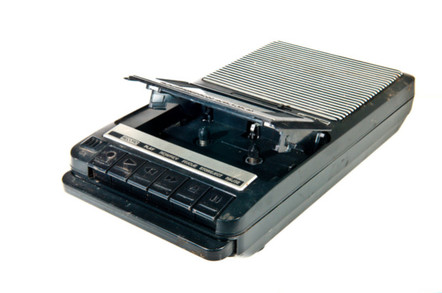 Something for the Weekend, Sir? I once tried to do it standing on one leg, arms pressed against the wall for stability.

On other occasions, I would do the business with arms and legs akimbo. In fact, I have variously tried it huddled in a corner, sitting on a ping-pong table, at both ends of a teak sideboard, straddling the back of a leather sofa and even balanced on a set of bookshelves full of hideous rattling ornaments but not a single book, all the while juggling lots of things between my hands.

And my knees would be trembling with the terror that what I was doing was probably illegal.

Home taping was never simple when you were a kid, was it?

Re-recording your favourite tracks to a mix-tape was rated No. 1 in a recent list of "Top 25 things we miss but no longer do due to technology" according to a vacuous and unnecessary survey commissioned by a company whose name I've already forgotten and conducted by another who I'd never heard of before (onepoll.com). So it must be true.

Other items in the list included such gems as having to wait to get your photos developed in a shop before you can see them (No. 5) and dialling directory enquiries (No. 19), which to my mind are two significant examples of things that no-one misses unless they are insane and a perfect reminder of why the good old days of the past were in fact utterly dreadful.

There are some even more questionable "things we miss" in there, such as carrying a portable CD player (No. 13) and ringing the speaking clock (No. 23), neither of which I'm convinced anyone actually did except in magazine adverts and TV comedy shows. "At the third stroke…" Ooh yes, matron!

I loved home taping, even though it was tricky back in the days when all the equipment you had to work with was a cheap stereo record player with plasticky 6W speakers and a battery-powered cassette recorder with piano keys and a built-in mic that made everything sound like it was recorded in a stainless steel kitchen at 3am. Getting the mic close enough to the speakers had me climbing bookcases and all sorts.

Mind you, it was a portable cassette recorder: it might have weighed 37kg but it had a handle and could run on LR14 batteries – about 12 of them, I think.

I enjoyed stacking up the albums in the order in which I intended to sample their tracks, then changing my mind after the first song. I marvelled at how long the process took, a mere C90 (that's 45 minutes on each side, kids!) occupying a whole afternoon to record and thereby putting off my weekend homework until Sunday evening.

Best of all, my juvenile 1970s mind thrilled at the prospect that the flying squad could at any moment burst through the front door and charge me with copyright theft while a generic Gene Hunt kicks me in the nuts and calls me a "nonce".

By coincidence, Mme D has been binge-watching a new American TV reality show called Hoarders: Morbidly Obese and Surrounded By Dead Cats and has been clearing out more of our cupboards as a result. One of them was full of cartoons on VHS, recorded to occupy our kids in the mid-1990s before the launch of Nickelodeon and Cartoon Network. Another cupboard, though, was mostly stacked up with retail-purchased music albums on cassette and loads of mix-tapes on Chrome C90s that I'd lovingly crafted from library-borrowed vinyl while I was a mullet-coiffed, pixie-boot attired student in the early 1980s.

We dumped the VHSes at a charity shop. Most of the mix-tapes, however, were dumped at the dump. I kept most of the retail cassette albums because I realised that some of the tracks, and in a couple of instances entire albums, are unavailable in any commercial digital format whatsoever – least of all streaming.

Oh God, don't get me on to bloody streaming again. I ranted on about it here. And here. And on plenty of other occasions too.

I have tried music streaming services several times and they are all shit. Among the many memorable shit examples were live albums played back with a two-second gap of silence baked into the end of each song – great fun when the band plays a medley, please note Apple – and albums for which the streaming service has got the track names in the wrong order and scanned the back of the cover art by mistake instead of the front (take a bow, Spotify).

It also baffles me how these streaming services pay the copyright owners a pittance and themselves suffer consistently huge financial losses while at the same time turning the owners into billionaires. They should call this the Carillion Method.

I am not a complete Luddite, though. I no longer own a record player for a start. I don't have a cassette recorder any more, at least not one that works. I do still own my classic Sony Walkman 4 in fire-engine red, of course, no one's allowed to touch that, but it gets no use at all.

I certainly don't want to return to wasting entire afternoons trying to time the release of cassette player piano keys to coincide with the precise moment that the stylus tears into the groove of the next track. Nor do I wish to listen back to mix-tapes occasionally adorned by the background barking of my Mum's dogs or punctuated by the voice of my Dad asking me if I've done my homework yet and whether it was me that had failed to flush the toilet earlier.

I don't miss all that. What I miss is the missed opportunity for digital streaming music services to do just one thing that might make them worthwhile: give a shit about music.

And on that note, let's round off with a song that I found in the aforementioned cupboard, released exclusively as a cassette-only single.

Try looking for that on Spotify…

Alistair Dabbs is a freelance technology tart, juggling tech journalism, training and digital publishing. When asked to specify a preference between C30, C60 or C90, all he would say was "A-bip-bam-boogie and a booga-rooga, my cassette's just like a bazooka" which puts paid to the theory that short quotes make useful soundbites.

US Declaration of Independence labeled hate speech by Facebook bots

UPDATE 'Sometimes we get things wrong' says The Social Network™, which fixed it in time for Independence Day