And somehow the goofball sci-fi franchise is still going strong 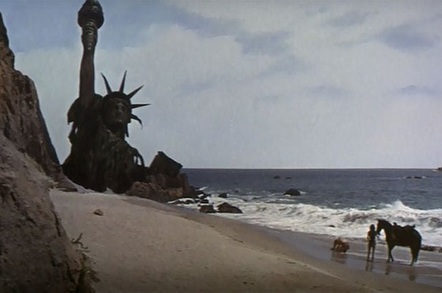 On a cold, dry evening of February 9, 1968, cinemagoers at New York's venerable Capitol Theatre were the first members of the public to be taken to a new but worryingly familiar world.

Ahead of the film's nationwide April opening, patrons of the picture palace at 1645 Broadway half a century ago caught an early glimpse of the Planet Of The Apes.

Based on a 1963 Swiftian satire by French author Pierre Boulle set in 1968, Planet Of The Apes was an ostensibly goofy science-fiction tale directed by Franklin J Schaffner about a team of astronauts led by a chisel-jawed George Taylor (Charlton Heston) who blast off from Earth in the suitably futuristic year of 1972 and, by some dint of inconvenient Einsteinian time dilation, end up on a planet ruled by chimps, gorillas and orangutans.

The premise is that in 3978, many hundreds of years after a nuclear war destroyed human civilisation, our near-relatives, the great apes, underwent the same evolutionary leap that had taken our bloodline from forest-dwelling apes like Ardipithecus ramidus to the species that would eventually split the atom, walk on the Moon and invent reality TV.

Taylor learns that humans had somehow – related to the collective trauma of near-extinction – lost the power of speech. A loss of ability coincidentally suffered by our astronaut friend through an unfortunate accident. This prevents him from just explaining the situation and making the film an interesting 15-minute short.

Robbed of his voice and his astronaut outfit, Taylor looks like any other voiceless human of the fourth millennium. Soon enough, he's captured by equestrian gorillas. Shenanigans ensue. 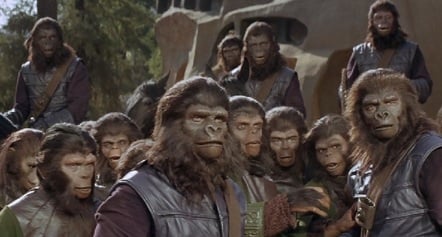 Taylor eventually enlists the help of chimpanzee scientist Cornelius – a scene-stealing turn by an almost unrecognisable Roddy McDowell – and after a few more adventures comes to the realisation that this "planet of the apes" is in fact his homeworld.

The scene of his final realisation is so widely imitated and homaged that even if you haven't seen the original 1968 movie, you'll know it in an instant.

It's a pretty good film. If it popped up on ITV2 one wet weekend you'd think it was time well spent. Especially if you had a few cold drinks and a large pack of lady crisps to hand.

But somehow this pretty good film – which picked up a handful of Oscars for makeup, costume and musical score and earned $33m domestically in the US and worldwide – spawned a legend.

Fifty years on we've had four direct sequels, two TV series in notionally the same timeline, an abortive reboot by Tim Burton, and three really-much-better-than-you'd-expect rethinks starting with Rise Of The Planet Of The Apes in 2011.

How? It's just a bunch of guys dressed up as monkeys, right?

We have been fascinated by our genetic cousins almost as long as we have been aware of our own humanity. Big monkeys sell.

Look at The Murders In The Rue Morgue, King Kong, Marlene Dietrich's unforgettable burlesque turn in Blonde Venus, or the almost monthly appearances of gorillas on the covers of DC comics through the 1950s and early 1960s. We can't get enough of those big hairy galoots.

The appeal is rooted in their familiar "otherness". While a genuine alien species would probably be so unfathomable as to be barely recognisable as a creature at all, the intelligent ape beloved of fiction looks human enough to be comprehensible, but different enough to act as a screen for whatever mad notions we want to project upon it.

Planet Of The Apes turned out to be a lot more than a goofy science-fiction flick.

The original French novel plays a trick on its readers. The story is actually told from the perspective of sentient apes but we don't know that until the story ends. Original screenwriter Rod "Twilight Zone" Serling irons out the literary conceit and instead adds the iconic Statue of Liberty ending.

After the film became a critical and popular success, 20th Century Fox rushed a continuation of the story into production. Beneath The Planet Of The Apes did reasonably at the box office but failed to please the critics. No amount of faceless telepaths can disguise the fact that it's basically the same story again.

Despite Beneath... depicting the absolute end of the world, Fox commissioned two more sequels from Arthur P Jacobs's APJAC productions.

They turned out to be better films, in part by dialling up the idea of the conflict between the humans and the dominant apes being an allegory of the racial tension preoccupying American city dwellers through the first half of the 1970s.

Any complex allegorical notions were ditched in the 1974 TV series, which took a pair of new astronauts and old Apes franchise stalwart Roddy McDowall through a series of picaresque hour-long adventures to dwindling audiences in the era of Watergate, Vietnam and threatening global conflict.

The music's not bad, though.

The lacklustre live-action TV show was followed in 1975 by an animated version – this at least had the benefit of being able to present the apes' world as technologically advanced as Boulle had envisaged. The Bronze Age stylings of the 1968 film were purely a budgetary decision.

The best thing – in fact the only good thing – about the animated show was that the simian society had their own master playwright called William Apespeare.

The Apes flame almost went out after that, kept flickering by a comic book series and the odd TV rerun. But you can't keep a good idea down: towards the end of the 1980s, moves to restart the franchise started circulating in Hollywood, driven largely by He-Man director Adam Rifkin.

Despite star names such as Aliens and The Terminator director James Cameron and Arnold Schwarzenegger becoming associated (Arnie was courted to appear in a reboot with Vietnam war and conspiracy filmmaker Oliver Stone) with new films during the 1990s, it took until 2001 to come to fruition.

Tim Burton, perhaps best known for Beetlejuice and his two Batman films, presided over a reboot of the story that apparently dispenses with the future-Earth conceit, depositing astronaut Mark Wahlberg on an ape-dominated planet called Ashlar.

It's worth seeing, though, if only for Charlton Heston's almost unrecognisable cameo as Doctor Zaius.

For Apes-mania to start again in earnest it took a complete ground-up rebuild.

Rise Of The Planet Of The Apes gives us a contemporary, relatable origin for the talking apes in the form of gerontological biotech, and kicked off a smash-hit series every bit as successful as the originals.

Two well-received sequels followed and at the time of writing a fourth, as-yet unnamed film in the current cycle is on the cards.

The talking monkeys will be back one way or another.

Planet Of The Apes, as an idea, is a modern legend, like Frankenstein or Invasion Of The Body Snatchers or The Terminator. These are stories that resonate with our deepest questions about the nature of ourselves, which also happen to make awesome popcorn movies.

Plus, who doesn't love a talking monkey? ®

If you have any poo, fling it now

I love this company! Steve Ballmer's screen test for Planet of the Apes

We'd certainly have given him a part

Earth-snapping Suomi gets its kit out for the labs

Invasion of the virus-addled lightbulbs (and other banana stories)

Something for the Weekend, Sir? Why Pinky? What are we doing tomorrow?

Ovi Maps rather cheaper to use now