Cyberlibertarian and Grateful Dead lyricist passes away at 70 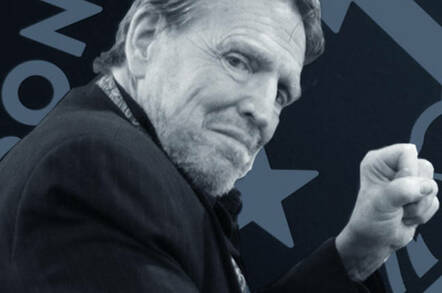 Obit John Perry Barlow, a co-founder of the US Electronic Frontier Foundation, and also a lyricist for the Grateful Dead, has died aged 70.

Barlow passed away "quietly in his sleep" yesterday, according to the EFF, which he helped set up in 1990.

"It is no exaggeration to say that major parts of the Internet we all know and love today exist and thrive because of Barlow's vision and leadership. He always saw the Internet as a fundamental place of freedom, where voices long silenced can find an audience and people can connect with others regardless of physical distance," said the foundation's executive director, Cindy Cohn.

The BBC reported that Barlow had been ill for several years but "few details were given about his medical problems".

In the history of the Internet, Barlow will be forever remembered for his 1996 Declaration of the Independence of Cyberspace.

"I declare the global social space we are building to be naturally independent of the tyrannies you seek to impose on us. You have no moral right to rule us nor do you possess any methods of enforcement we have true reason to fear," wrote Barlow, a bold vision of the future that, sadly, did not come to pass.

It quoted the man himself as saying: "I knew it's also true that a good way to invent the future is to predict it. So I predicted Utopia, hoping to give Liberty a running start before the laws of Moore and Metcalfe delivered up what Ed Snowden now correctly calls 'turn-key totalitarianism'."

Barlow was also a key player in the creation of the US Freedom of the Press foundation, which, among other things, campaigns in favour of the ideals of openness, transparency and freedom that Edward Snowden publicly champions.

An inductee to the Internet Hall of Fame, Barlow entered the public eye by writing lyrics for noted psychedelic rock outfit the Grateful Dead between the 1970s and 1995. Barlow himself remained friendly with rhythm guitarist Bob Weir during and after the band's heyday.

In spite of his long association with the Dead, Barlow was the only one of the group who was not inducted into the Rock and Roll Hall of Fame, though the band's website lists him as a member.

The band itself posted a link on its website to a Spotify playlist of Barlow-authored songs. ®

Hey, those warrantless smartphone searches at the US border? Unconstitutional, yeah? Civil-rights warriors ask court to settle this