Uber: Ah yeah, we pay women drivers less than men. We can explain! 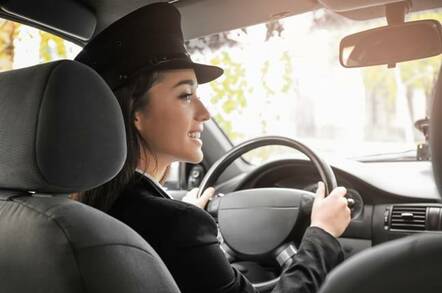 Uber drivers who identify as women make seven per cent less than their male counterparts on average, research has found.

You can't blame this one entirely on Uber bros, though.

A study by Stanford University eggheads and Uber staffers in the US found the difference in earnings is actually down to driver experience and usage patterns. Specifically, the study stated, drivers who make runs for Uber more frequently are more likely to know where and when to operate in order to get the highest-paying fares.

Thus, because women, on average, spend less time driving for Uber than their male counterparts, they are less likely to be around to grab the highest-paying fares.

"Men’s willingness to supply more hours per week (enabling them to earn more) and to target the most profitable locations shows that women continue to pay a cost for working reduced hours each week, even with no convexity in the hours-earning schedule," the research team stated.

The study, which was based on data collected from 1,877,252 drivers operating in America from January 2015 to March 2017, examined factors including average hours worked per week, money earned over the whole week, and money earned per hour. Yes, Uber has these stats on its app's drivers. Of course, it has.

Overall, the gang concluded that those who drove an Uber car more often were able to make more per trip, and because on average the men surveyed drove 50 per cent more often, they were able to get on average $21.28 (£15.23) per hour compared to $20.04 (£14.35) logged by their female counterparts.

With more time driving, we're told, comes a better idea of when and where the best fares are to be expected.

"Even in the relatively simple production of a passenger’s ride, past experience is valuable for drivers," the study found.

"A driver with more than 2,500 lifetime trips completed earns 14 per cent more per hour than a driver who has completed fewer than 100 trips in her time on the platform, in part because she learns where to drive, when to drive, and how to strategically cancel and accept trips."

At least one other factor was cited in the gap: speed.

The study found that while driving for Uber, men tended to drive around 2.2 per cent faster than women. This meant that, over the long haul, they were able to rack up a few extra trips and make a bit more money.

"Drivers are paid according to the distance and time they travel on trip and, in the vast majority of cases, the loss of per-minute pay when driving quickly is outweighed by the value of completing a trip quickly to start the next trip sooner and accumulate more per-mile pay (across all trips)."

While Uber has taken plenty of well-deserved criticism for its treatment of women employees and customers, in this case the 93 per cent of female driver earnings compared to men are actually ahead of the US at large, where women only earn about 80 per cent of their male counterparts. ®