Can't wait to get to Mars on a SpaceX ship? It's a cold, dead rock – boffins 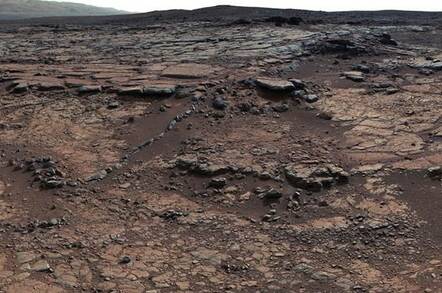 SpaceX today parked Elon Musk's Tesla Roadster in Earth's orbit, using a Falcon Heavy lifter, with a rocket strapped to the flash motor to take it on to Mars.

The billionaire also wants to set up a base on the Red Planet, and use his rocketry technology to ferry brave folks over there to face certain death, er, glory as early colonists. If that sounds super-fantastic to you, boffins have a reality check: Mars sucks. And it sucks hard.

Scientists studying the unforgiving dust world believe it has always been too cold and dry for life to ever develop on the surface and, if any did develop, it will only be found underground. Anyone who sets foot on the planet will face horrendous conditions, and if they go searching for E.T., they'll need to bring a power drill, basically.

A paper published in Nature Astronomy on Monday stated that just because there are signs there may have been liquid water on Mars at some point, its climate prevented it from becoming habitable. There is evidence the planet’s valleys and ravines were carved by running water, and salty crystals and aqueous minerals were left behind on the surface after the liquid dried up.

However, the above study's authors – from the US, Europe, and China – believe that this water was formed during “sporadic, short-term warm and wet environments during a generally cold early Mars.” In other words, Mars was and is generally too cold and too dry to form life; its wet periods were too short for living things to develop. And unlike Earth, which was bathed in the warm glow of the Sun allowing life to flourish, Mars does not and never had enough sunlight. It's a screwed-up place, and finding extraterrestrials on it will be tough.

Life managed to evolve on the surface of Earth due to sunlight powering biological processes, the presence of water, and its magnetic field shielding it from strong radiation. Since Mars is much colder and drier, and hasn't had a magnetic field for eons, the chances of life developing on its surface are slim.

In a separate study published in Nature Astronomy, coauthor Joseph Michalski, a researcher at the University of Hong Kong, recommended colonists and robot probes visiting Mars look below the surface for any signs of life.

“By the time oxygenic photosynthesis evolved on Earth, Mars had been a hyper-arid, frozen desert with a surface bombarded by high-energy solar and cosmic radiation for more than a billion years, and as a result, photosynthetic surface life may never have occurred on Mars. Therefore, one must question whether searching for evidence of life in Martian surface sediments is the best strategy,” the study, dated December 2017, said.

Some theories suggest life on Earth may have sprung from deep hydrothermal vents, and a similar situation may have unfolded on Mars... except life did not get far enough to branch out to its surface. Eggheads believe the Red Planet is the only object in the Solar System with an ancient, preserved, easily accessible crust with clear evidence of “water-rock relations” dating back to a time when life appeared on Earth, comparing it to a “Rosetta Stone” for early Earth.

To prove whether there is or was life under the Martian surface, scientists will have to dig up underground rocks and use infrared spectroscopy to detect minerals that are linked to the presence of life. Studying the surface is a dead end, literally. These findings will, overall, help boffins understand how life forms on planets other than our home world.

“It speaks to the very heart of trying to understand how life may have evolved not just on Earth but on other terrestrial bodies both in our own solar system and indeed around other stars that have planets that lie in the so-called 'habitable zone', where liquid water can exist on the surface,” Michalski noted this week. ®