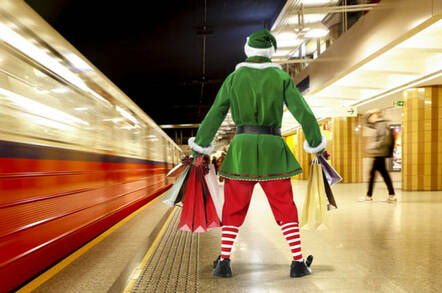 Put it away! We're warning you!

The UK's gummy-mouthed Advertising Standards Agency has given Poundland a gentle spank over a series of smutty tweets and posts on Facebook published over the Xmas period.

The budget store positioned toy character Elfie at the centre of the double entendre laden #ElfBehavingBad* campaign, eliciting complaints from 85 people who said they were offensive and could have been seen by kids.

The steamy social media action, in and amongst ads about a chocolate, make-up and Xmas tat, included nine posts between 11 December until 21 December. In these posts, Elfie made sexual references.

Oh Elf, we know it’s nippy outside but not that kind of nippy! #ElfBehavingBad pic.twitter.com/kYMNruqLda

That’s one way to scratch that itch. That’s not Santa’s toothbrush is it?! pic.twitter.com/bzgX3LFEDA

The ASA, which has the power to ask Poundland not to publish similar material in future, upheld the complaints and said the bargain basement retailer’s Facebook and Twitter feeds were “not age-gated and could therefore be seen by anyone”.

The watchdog also agreed ads in which Elfie was playing strip poker, holding a tea bag** between his legs with a female doll lying underneath him and one of him playing strip poker above a caption “I really want to poker”, were “demeaning to women”.

“We therefore concluded the ads, which depicted the toy figures in a sexualised manner and appeared in an untargeted medium where they could be seen by children, were irresponsible and were likely to cause serious or widespread offence,” the ASA said in a statement.

The ads must not appear in their current form or the ASA will give Poundland another stiff telling off.

In response, Poundland voiced “disappointment” in the judgement and that the ASA felt obligated to pursue the matter formally “when clearly you must be very busy”. And it called into question the number of complainants.

“Our disappointment is also because we are sure our Elf campaign was based on one of the things that makes us British - humour based on double entendres that go over the heads of those that don’t understand them and make those that do, laugh out loud.”

“In our view, a love of this kind of humour is uniquely British - from the first pantomime in the 1700s to the 1930s invention of the saucy seaside postcard, to Carry On films from the '60s and '70s.”

Poundland said the ASA had made it aware of 23 complainants in correspondence, “Can we assume that 57 complaints were ones that you felt were actionable under the Code?”

The store said "thousands and thousands" of people found the campaign to be the "funniest thing they'd seen in quite some time" and that even though it clearly wasn't to everyone's taste, it "does not automatically mean that a campaign is offensive".

Poundland apologised for causing any offence but claimed it remained "proud of the campaign. Proud of its effectiveness. Proud of the reaction from the overwhelming majority of people who saw it".

"Sadly we live in an age where there's always going to be someone who's offended by something. We ask that you send a strong signal that you are supportive of creativity in advertising."

Has Poundland learned a lesson? Nope.

* Yes, it should be "badly". They've pretended an adjective is an adverb. This is much, much, much more offensive than anything they've done on the teabagging front. This is simply disgusting.

** El Reg notes hot beverage purveyor Twinings' haste to distance itself from the teabagging elf. It made sure its message steeped into Twitterati mugs by noting on the very same day:

We are aware of an image that is circulating that misuses our product. This is to confirm that we had no involvement in this and that it is obviously not reflective of our brand values.

Google shaves half a gig off Android Poundland Edition

Something for the Weekend, Sir? Please now wash your hands