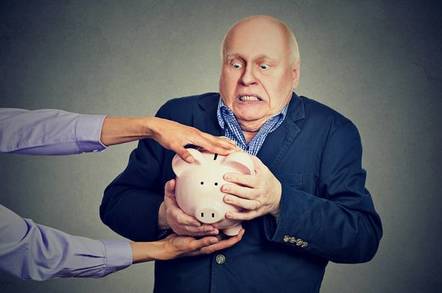 Google-parent Alphabet suffered a $3bn loss of the final quarter of 2017 after handing over $9.9bn to Uncle Sam due changes in the US tax system.

Despite that hit, Alphabet is still very profitable [PDF] as you'd expect for a biz with near monopolies in ads, search and mobile phone operating systems: it would have banked $6.8bn in profit for the quarter without the taxation charge.

"This year is very special for us as it has been 20 years since Google was founded," said the Chocolate Factory's CEO Sundar Pichai. "Many things have changed but our mission of making the worlds information searchable will continue. Becoming a more AI-focused company will help that proceed."

Google's next phase of growth will be based on three pillars he said: cloud, YouTube, and hardware. On the cloud front, Google broke a milestone by having its first billion-dollar-quarter in terms of cloud services sales, and claimed it is now the fastest growing provider of public cloud services in the market – which isn't too difficult when you're not the market leader.

And by the way, that $1bn is a fifth of Amazon's $5bn-a-quarter AWS operation.

The Chocolate Factory also claimed the number of Google cloud deals that bring in more than $1m had more than tripled from 2016 to 2017, and that there are 4m paying G Suite customers.

On the YouTube front, business was good, Pichai said. More than 1.5 billion people a month use the site, which is now localized in 90 countries. This year Google signed deals with Universal and Sony to carry music videos, and inked a contract with concert-gougers Ticketmaster.

Google's hardware division has an excellent fourth quarter, with sales up strongly as you'd expect after a major product launch and in the run-up to Christmas. Pichai said he was "especially excited" about the Google Home range of devices, and said shipments of all hardware have doubled since this time last year.

Here's a summary of the fourth quarter results, the three months to the end of December 2017:

Overall results for the year were good, but again not as good as Wall Street was expecting. Here they are the figures for the full year:

Google also named its new chairman to replace the outgoing Eric Schmidt. The lucky winner is John Hennessy, who has been a board member since 2004 and is probably best known as the founder of MIPS Computer Systems. ®