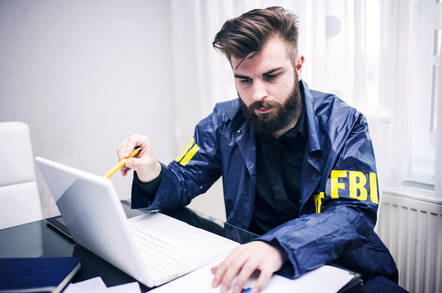 Some scammers may have bitten off more than they can chew after they tried impersonating the FBI to spread malware.

The Feds' Internet Crime Complaint Center (IC3) issued an alert on Wednesday warning that it has received numerous complaints from citizens who have received emails purporting to be from IC3. Each message states that the recipient is due money as compensation from a cyber-attack, and asks them to fill out the attached document with their personal details – and, yup, you guessed it – that file is laden with malware.

The email claims a Nigerian had been arrested by the FBI in Atlanta, USA, and that the recipient's email address had been found on the imaginary scammer's computer. All the mark has to do to pocket their windfall is return the document with their contact details and wait for the cash to arrive.

"At least three other versions of the IC3 impersonation scam have been identified," the FBI warned. "As of July 2017, the IC3 has received numerous victim complaints regarding the scam."

Two other variants of the emails are in circulation. One claims to come from the FBI IC3 office in Houston, Texas, and informs the lucky recipient that they are due $10.5m in compensation from banking fraud.

The third letter take a more threatening tone, saying that the IP address associated with the recipient's computer has been under investigation since September 2017 for online crimes. The receiver is instructed to fill out the enclosed booby-trapped form and return it.

So far the FBI says no one appears to have been financially hurt by the scam, and it is probing the con. Agents are also seeking out the scammers – and very few things piss off the G-Men like someone taking their name in vain. Expect arrests. ®