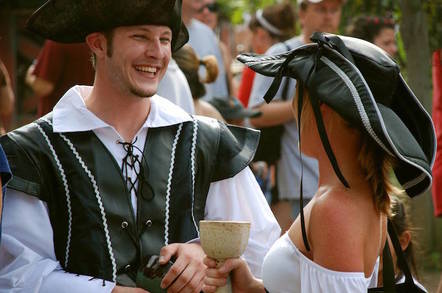 [I asked for pirates and you found this? – ed.]

American cable company Cox may not, after all, have to pay record label BMG $25m for letting its broadband subscribers illegally download and share copyrighted music online.

The Fourth US Circuit Court of Appeals ruled on Thursday that a jury was given incorrect instructions when it decided in 2016 that Cox was liable for its plundering punters and thus owed BMG millions of dollars.

The case stems from Cox's handling of copyright infringement complaints the music label had passed it. After a row, Cox blacklisted communications from Rightscorp, the biz that handles infringement notices for BMG. This meant Cox did not see the infringement warnings, and thus did not step in when its users were found to be pirating music files belonging to BMG.

Cox had appealed the jury verdict, arguing first that it should be protected from legal liability under the Digital Millennium Copyright Act (DMCA) safe harbor clause, as well as arguing that the jury was not properly instructed on the law before entering deliberations.

According to Thursday's ruling [PDF], the appeals court did not side with Cox's DMCA safe harbor claim, reaffirming the earlier ruling that Cox did not do enough to stop repeat offenders and therefore could not claim safe harbor.

Where the lower district court was found to have erred in 2016, however, was in the jury instructions. The appeals court agreed with Cox's argument that the jury's instructions on how to interpret the law were wrong.

Music publisher BMG vs US cable giant Cox: Here's why it matters

According to J. Michael Keyes, partner with law firm Dorsey and Whitney, the decision could make it tougher for labels to sue service providers.

"In order for contributory liability to attach, copyright owners will arguably need to meet a higher threshold. They will have to establish that the ISP knew about the infringement or was willfully blind to it," Keyes told The Register. "That could make contributory liability claims against ISPs a bit more difficult to establish as a factual matter."

As a result of the appeals court ruling, Cox can take its battle against BMG back to a district court for a retrial, which will no doubt thrill all the lawyers involved. ®