Just can't catch a break, can ya, Capita? Shares tumble 40% amid yet another profit warning 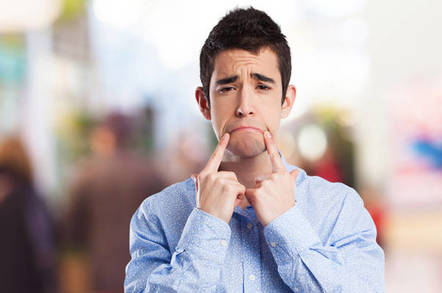 Capita's stock plunged more than 40 per cent today after the firm issued another profit warning, suspended dividends and issued £700m in new shares.

In a damning prognosis of the public sector outsourcing giant's woes, new chief exec Jon Lewis said "significant change is required" at the outsourcing biz, describing it as "too complex" and "driven by a short-term focus" as well as lacking "operational discipline and financial flexibility". Ouch.

As such, Lewis intends to dispose of non-core assets with car park management biz ParkingEye and procurement and supply chain management Constructionline identified as early candidates.

The firm has also struggled with a number of big contracts. Earlier this month Prudential tore up its £722m deal with the outsourcer five years ahead of time. Then a bunch of embarrassing glitches were exposed in Capita's recruitment system for the Ministry of Defence. The company has also been subject to a probe by the National Audit Office over its £700m GP support system. The list goes one.

Capita has underinvested in the business and there has been too much emphasis on acquisitions to drive growth. As our markets have evolved, the Group has not responded consistently to new customer demands. Since December, we have continued to experience delays in decision making and weakness in new sales.

Today, Capita is too complex, it is driven by a short-term focus and lacks operational discipline and financial flexibility.

Philip Carse, head of research and principal analyst at Megabuyte, described the firm's acquisition strategy in ICT software as a "car crash waiting to happen".

"A very high number of acquisitions, with seemingly little strategic rationale and even less integration execution. It has been clear to anyone close to these deals that they have been primarily done to maintain the illusion of growth for investors.

"More broadly, the cynic might suggest that Lewis is 'kitchen sinking' the Capita numbers (i.e. throwing all the dirty stuff in) to establish a low (in profit and share price terms) against which his performance can be judged ('never knowingly undersold')."

Carse also noted whether the release has been influenced by the Carillion scandal. "Capita is not the low-margin business of Carillion, but it now suffers from a lack of growth, and profits are clearly not being matched in terms of cash flow, most notably due to adverse working capital movements. Capita also has a pension deficit (£81m at June 2017).

"Overall, Jonathan Lewis clearly doesn't want to go down in history as another CEO that kept paying out dividends whilst debt keeps racking up, endangering jobs and pensioners alike."

Lewis's turnaround strategy follows a previous attempt by Capita to get its sprawling house in order at the end of 2016, after it issued its first-ever profit warning.

That involved axing 2,250 staff, sending more jobs to India and using robots to automate certain parts of the operation.