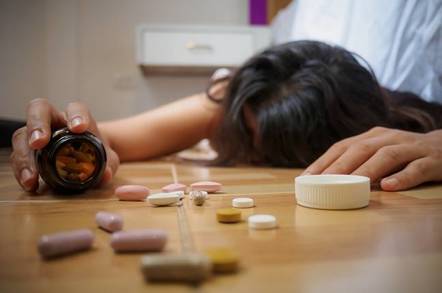 The US Attorney General has set up a task force of FBI agents and tech nerds to further smoke out online peddlers of illegal opioids.

The team, dubbed the Joint Criminal Opioid Darknet Enforcement, aka J-CODE, will be sent out to a dozen American cities that have hotspots of opioid abuse to work out where the gear is coming from. The force will then try to identify the sources online, and shut them down, as the Trump administration reignites America's war on drugs.

Announcing the policy in a speech on Monday, Attorney General Jeff Sessions talked tough on crooks lurking within the darknet – which are anonymizing networks, such as Tor, that can be used for good, and can also be used by drug traffickers to evade the cops and Feds.

The FBI has tricks up its sleeve to potentially unmask some Tor users, and has found other ways to take over darknet websites, usually by seizing servers.

“Criminals think that they are safe on the darknet, but they are in for a rude awakening,” Sessions said.

“We have already infiltrated their networks, and we are determined to bring them to justice. The J-CODE team will help us continue to shut down the online marketplaces that drug traffickers use and ultimately that will help us reduce addiction and overdoses across the nation.”

According to the US National Institute of Drug Abuse, opioids kill more than 90 Americans every day through overdoses, and they have been a significant contributor to reduction in life expectancy in America (although this humble hack suggests the parlous and extortionate state of healthcare in this country may have something to do with it.)

Sessions said the darknet has made it far too easy for people to get illegal opioids and have them delivered direct to their front doors. Such suppliers were often overseas. The J-CODE team will primarily focus on domestic sellers, unless it can get cooperation from other nations.

While cracking down on illegal sales of dodgy painkillers is a good thing, the government is being less than active when it comes to combating ostensibly legal opioids. On Tuesday, the House of Reps' energy and commerce committee announced that it was sending a stern letter to legal opioid sellers who may be breaking the law.

The committee was reacting to press reports from West Virginia, which has the highest opioid death rate in the US, that revealed two drug distribution companies were making some very odd deliveries.

For example, a pharmacy in the small town of Williamson, population around 2,900, received shipments of 10.2 million hydrocodone pills and 10.6 million oxycodone pills over the last ten years. Over a two year period, the 392-person hamlet of Kermit received almost nine million hydrocodone pills. Surely, you might think, this huge stockpile of a controlled substance can't possibly be used purely for legit medical reasons.

“These numbers are outrageous, and we will get to the bottom of how this destruction was able to be unleashed across West Virginia,” said committee chairman Greg Walden (R-OR) and ranking member Frank Pallone Jr (D-NJ) in a joint statement. Before you get too impressed, this is the second letter on the topic, the first being sent out in September. But apart from letters, it seems very little action is being taken on the issue by the federal government.

How successful will the J-CODE teams be? It's unlikely that Tor's integrity and security has been cracked, so they'll probably focus on sting operations and tracking postal deliveries. When Sessions says agents have infiltrated networks, he mostly likely means supply networks. Meanwhile, the death count clicks higher every day. ®